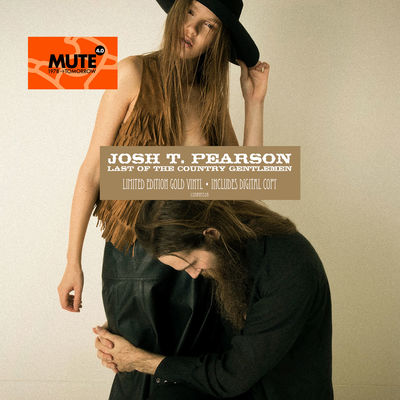 As part of Mute‘s fortieth ‘anti-versary’, the label is making available very special limited edition vinyl versions of selected releases from their four decades of releasing and curating incredible music. To celebrate this element of Mute 4.0, we’re re-posting reviews of those special albums from the depths of the Documentary Evidence archives. Full details on the releases can be found here.

Last Of The Country Gentlemen, Josh T. Pearson‘s much-anticipated début album, garnered all manner of positive reviews in the run up to its release. In a climate where everyone seemed to be focussed on the retro punk stylings of The Vaccines, it was pleasing to see that an album consisting mostly of heart-wrenching confessionals delivered by a singer over simple accompaniment (mostly guitar, some strings) could get so much positive praise. The album was preceded by a piano version of the track ‘Country Dumb’, the album version resplendent with guitars and violin instead of piano, a towering yet fragile ballad that stirs something deep within.

On a personal level, Last Of The Country Gentlemen‘s gentle, emotional grace is deeply affecting. I listened to this over a weekend where we had sold or given away some clothes, toys and other ephemera belonging to our two girls, in itself a moving experience, and Pearson’s songs of transition seemed to heighten the fragile mood I was in over the weekend.

Pearson’s voice is a beautiful thing to listen to. Occasionally whispered, occasionally rising with clarion quality, the consistent aspect is that he makes every single syllable, every word and every line count; everything that comes from his mouth is freighted with depth and sentiment. Though his Texan twang is a million miles away from Antony Heggarty’s vocal gymnastics, the two singers share the same talent for soaking their most basic utterances in something indefinable which can leave you feeling affirmed, tearful and empty after listening to their music; you will need to invest almost everything you have into listening to these songs, and you will feel utterly spent at the conclusion. One song is hard enough; eight songs is nigh on torturous.

Last Of The Country Gentlemen was, according to The Times review, written during a period of heartbreak, and there is a definite theme of separation running through the eight songs here (three of which are well over ten minutes in length). However, with the exception of the bitter (yet controlled) statement of intent ‘Woman, When I’ve Raised Hell’, soaked in strings arranged by Dirty Three and Bad Seeds / Grinderman violinist Warren Ellis that amplify the mood palpably, the theme does not appear to be one of regret at his loss; more, there is a resigned air of Pearson almost forcing a separation, for the benefit of his lover. The twelve minute ‘Sweeheart I Ain’t Your Christ’ is a case in point – throughout this song, Pearson is effectively advising his lover that she’d be better off without him. That sense of setting someone free, for their benefit, especially if they don’t realise it, is just about the hardest damn thing to do, a selflessness that is gut-wrenchingly moving.

That theme is somewhat at odds with the sleeve, which appears to show Pearson trying to prevent his lover – whose face is blank, emotionless, detached – from leaving. He is grasping her legs, eyes closed, as if he would rather be dragged across the gravel rather than let her go, but it fits with the heartbreak and torment evident in the songs here. The track ‘Honeymoon’s Great! Wish You Were Her’, is a song about marrying someone but still being in love with someone else; this is the closest Pearson gets to being frustrated with his lot (albeit, it seems, of his own doing), and there is a section where the strings come up in great big swells that make you sympathetic toward his conflict, not angry at his infidelity. ‘Sorry With A Song’ is Pearson’s apology, of sorts.

Something about these songs encourage you to believe that Pearson is telling you his story here; like a début novel, the roman a clef tends to be written mostly from personal experience and emotions, containing thinly-disguised autobiographical aspirations more than pure fiction. These songs seem so honest, so genuine, that you want to believe that this is Pearson’s own story being articulated across these eight songs in spite of the desperation, frustration and sorrow contained here. We would be faintly disappointed if this songwriting was found to be fictional.

Last Of The Country Gentlemen was recorded in Berlin, and mixed in London by Gareth Jones (although a couple of tracks were mixed by David ‘Saxon’ Greenep). There is a sense of hands-off production on these tracks, a sense of respect for the songs themselves and the outpourings contained within them. Presenting the songs ‘just so’ is a brave, yet powerful thing to do; the album thus has a stark innocence that leaves me well and truly floored whenever I listen to it.

Mute released Last Of The Country Gentlemen again in November 2011 with a second disc of Josh T. Pearson performing a selection of Christmas songs, the occasion being Rough Trade Shops placing his album at the top of their 2011 album chart. The expanded version was only available from Rough Trade. To celebrate the release of Pearson’s Rough Trade Christmas Bonus, Rough Trade East printed up a special rubber curtain containing the picture from the Christmas EP’s sleeve to cover their front entrance.

The thing with Christmas carols is that they can often have an air of sadness about them; few have an obvious joyousness, though all have an inherent beauty. As such, Josh T. Pearson is well-suited to delivering the five songs he intimately performs here. Last Of The Country Gentlemen had few naturally uplifting moments, though – as evidenced by the live LP (again, only released through Rough Trade Shops) The King Is Dead – Pearson himself is actually pretty light-hearted and self-deprecating. Here we find him struggling while trying to pluck the notes to a lovely rendition of ‘Silent Night’, unaware that his musings are being recorded, cocking up the introduction to ‘Angels We Have Heard On High’ and delivering a faultless accapella rendition of ‘Away In A Manger’, which masterfully rescues the carol from thousands of painful school nativities. Likewise, his bluesy rendition of ‘O Little Town Of Bethlehem’ moves the song away from the tuneless butchering of this carol by assembled toddlers and into masterful, graceful territory. In defiance of his image as a humourless misanthrope, he even adds a wee coda of ‘Jingle Bells’ at the very end.

‘O Holy Night’ is testament to how Pearson can take a song that’s not his own and add his own distinctive style to create something utterly original. Here his reading sits somewhere between the melancholy grandeur of Last Of The Country Gentlemen and the more introspective aspects of the Rufus Wainwright back catalogue. In a burst of seasonal goodwill, an alternative version of of ‘O Holy Night’ was made available for free from Pearson’s own website.

For Mute 4.0, Last Of The Country Gentlemen is being reissued as a gold double LP edition.