If The Normal’s punk-inspired DIY single ‘Warm Leatherette / TVOD’ launched Mute Records then Fad Gadget truly made Mute a label, rather than a clever moniker attached to a one-off cult indie single: Frank Tovey was Daniel Miller‘s first signing to his label, with ‘Back To Nature’ the first single. Tovey, studying at Leeds Poly alongside the likes of Marc Almond, was a performance artist looking to integrate sound into his antics; he bought a Korg synthesizer, recorded a demo, sent it to Miller and launched Mute along a trajectory of signing uncompromising, inventive artists that continues to this day.

‘Back To Nature’ shares some of The Normal‘s bleak Ballardian reference points. Notwithstanding the dark tones that run through the track, Tovey’s lyrics have a whiff of the dystopian about them, with references to burning bodies under ozone-depleted skies, fake trees, people being high on sugar and kissing on the beach in amongst all of that… But then, perhaps it’s just a series of wry observations on what a typical British beach would have looked like back then (the references to it raining all night is probably the tell-tale signal there), headlines on tabloids insisting that ‘It’s a scorcher!’ while using showing some slightly sun-burned beauty in a bikini, eating rock or ice cream, memories of kiss-me-quicks at the Kursaal and over-priced inflatable water floats in the beach shop. So it’s either a nuclear-blasted wasteland or Tovey’s postcard from a mundane family holiday he didn’t want to be on; sadly, we don’t have the opportunity to ask Frank now.

Musically, ‘Back To Nature’ is formed of a generally polite, dry, almost funky electronic rhythm, offset by a menacing bassline and a simple melody that could soar majestically but which is so distorted that it almost growls in your ear whenever it comes to the fore. There are also drones, small synth shapes and interjections, what sounds like (but isn’t) distorted guitar feedback fuzz and electronic manipulations that sound like seagulls circling overhead. It’s cloying and unpleasant, sonically arresting and nasty at the same time, and proof that you didn’t need banks of electronic equipment to create electronic music. If Suicide had summered in England, this is probably how it would have sounded.

B-side ‘The Box’ takes together the same elements – pulsing, steady rhythm and angular, robotic Düsseldorf sparseness mixed in with harsh drones and grainy, oscillating electronic texture – and adds a increasingly-desperate lyric about needing to be let out of a metaphorical box, along with detached observations on overweight people and their pets, feeling like your life is a film, poisonous gases, Tovey feeling like he’s stuck inside a machine or industrial production line, and a bunch of other politically-charged vivid scene changes. The track’s final moments feature what sounds like electronic static moving uncontrollably toward you, reaching out talons of enveloping electricity, even that feeling like a welcome respite from the allusions to desperation and mental claustrophobia on the non-chorus.

Although he’s not credited as such, according to the liner notes that accompanied The Best Of Fad Gadget confirmed that Daniel Miller produced these two songs, and played synth on ‘Back To Nature’. The rear sleeve lists out the economy of equipment deployed to realise these two tracks – ‘Fad’s Gadget’s [sic.]: synthesizer, voice, electronic piano, rhythm generator.’ It was a statement of a fundamentally new approach, the essence of 1976’s Punk Year Zero realised through electronics. Like ‘Warm Leatherette’, the sleeve for ‘Back To Nature’ was designed by Simone Grant.

In the second line of ‘Back To Nature’, Tovey sings about a caravan at Canvey Island in Essex, legendary birthplace of pub rock and only a few miles from Southend-on-Sea where members of Depeche Mode and Alison Moyet were studying. Now a faded seaside resort, Canvey was once Britain’s fastest-growing holiday destination until a devastating flood prompted the construction of huge ugly concrete walled sea defences in the Fifties and foreign package holidays in the Seventies just kicked the body when it was already terminally ill; an unlikely bomb attempt from the IRA later in the decade disposed of the corpse. On a wet mid-Eighties evening while we were on holiday in Southend, my family and I took a trip to Canvey. It was one of the most uniformly terrifying experiences of my young life, starting with the drive past numerous deserted amusements, crazy golf courses and the like, and on onto those concrete walls, where we didn’t see a single person despite it only being early evening; a nihilistic young guy on a 50cc motorcycle emerged out of nowhere and was riding precariously on the top of the wall, a gust of wind or minor adjustment of his balance the only thing preventing him from crashing onto the concrete several feet below; a lone tractor raked over the sand, needlessly given the absence of any holidaymakers. And then there was the smell and looming presence of the island’s oil storage facilities. A solitary tanker, far out to sea, was causing huge waves to crash onto the beach. It is tempting to see how such a bleak, industrial wasteland might have inspired the young Tovey. 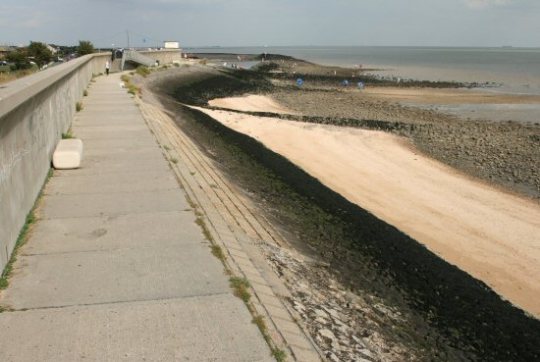