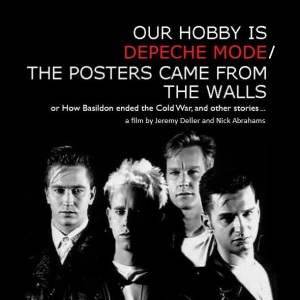 With a new Depeche Mode album and mega-tour just around the corner, and with fans evidently getting excited on social media sites like Twitter, it feels like an appropriate moment to write about Turner Prize-winning artist Jeremy Deller and director Nicholas Abrahams‘ film, Our Hobby Is Depeche Mode. The film, also known as The Posters Came From The Walls, was commissioned by Mute MD Daniel Miller and focusses its lens on the fans of the band, rather than acting as a strict biography of the group.

When I first saw clips of Our Hobby Is Depeche Mode on the BBC documentary about Deller in 2012, I was prepared to think of the film as ridiculing devoted fans of the band; people I’ve spoken to over the past year or so, generally hard-core followers of the band, have all told me that the film is universally disliked by most fans as it casually mocks what for many people is a huge obsession. Whilst there are a couple of segments that feel a little too devoted, such as German couple Claudia and Ronny dressing their young son in home-made costumes from Depeche Mode videos like ‘Enjoy The Silence’ or Muscovites Ruslan, Marta, Margo and Elena delivering awful versions of DM songs complete with home-made videos, Our Hobby Is Depeche Mode is in reality a very sympathetic and sensitive portrait that shows just how much a band can influence, help and shape peoples’ lives.

Throughout interviews with fans in St. Petersburg, Moscow, Bucharest, California, New York, Berlin, Iran and Canada, Depeche Mode emerge as a band that appealed to people who just didn’t fit in. Alex, a fan from Bucharest, explains that in the early Nineties the long-haired guys were into metal, the ugly guys were into folk, and the sensitive, clean-shaven, good-looking guys who wanted to know about the best clothes and fragrances were all into Depeche Mode; Orlando, a young fan from California dancing in the car park of the Pasadena Rose Bowl where the band played the 101 concert before he was even born, explains how Depeche Mode’s music helped him through the darkest days of his teenage years, saying ‘Martin Gore’s lyrics speak for me’; a Russian pirate TV performance sees a fan grabbing the microphone and stating that ‘it’s music for the lonely’; celebrity fan and self-confessed outsider nerd Trent Reznor says that for him Depeche Mode played ‘music for someone who felt like they didn’t fit in’; Andy, an Iranian fan now living in Canada explains that if you were caught listening to, or dressing like, Depeche Mode in Iran you would be beaten by authorities, and that for many in Iran Depeche Mode represented an outlet from an oppressive society. Even Marta, with her dreadful but heartfelt singing over Depeche Mode’s own songs, nails the message home when she says that the band’s music helped her to find her friends.

If seeing obsessed Russian fans dressing like members of the band on ‘Dave Day’ – 9th May, Russia’s Military Day and Dave Gahan‘s birthday – seems a bit too much, English fans will probably never appreciate how important Depeche Mode’s music was to people whose democratic rights were managed entirely by the state. Albert, a hairy-backed melancholy chap with a huge tattoo of Gahan from his shoulders to his waist, explains that for many Russians, ‘this new music coincided with the fall of the Soviet Union so I see it as having been the music of freedom.’ For Alex, the well-groomed fan from Bucharest, Depeche Mode’s music was synonymous with freedom, with Violator arriving just three months after the bloody fall of Ceaucescu and becoming the music of a generation of young people whose cultural exposures had been dictated to them before. A trio of East Berliners speak about the seismic impact Depeche had in the East when they played the Free German Youth Concert in 1988. In contrast, Peter Burton from Basildon explains that even now Depeche Mode aren’t well known in the town they came from whilst offering a pretty colourless picture of the Essex new town back in the late Seventies.

Taking the ‘back home they just don’t get it’ notion frequently attached to Depeche Mode one major step forward, the emphatic Francisca explains that Martin Gore‘s lyrics have a natural sense of tragedy and despair, something that she feels is central to Russian fans’ adoption of the band. She then goes on to brusquely tell the translator that English fans couldn’t understand or appreciate the lyrics in the same way as a Russian could. I perhaps don’t fully appreciate what she describes as the ‘transcendent nature’ of the Russian psyche, but I’ve read enough translations of Chekhov, Tolstoy and Solzhenitsyn in my time to see more or less where she’s coming from.

One of the most powerful stories comes from Mark, filmed at Hammersmith Bridge, under which he would sleep as a homeless resident of London. Mark’s story perhaps punctures a large hole in Francisca’s logic about English fans – here is an individual who spent most of his homeless years listening to 101, scraping together enough cash to buy a ticket to see one of the band’s watershed concert at Crystal Palace on the Songs Of Faith And Devotion tour and drawing so much inspiration from the powerful feeling of togetherness that he experienced at the show to get himself off the streets.

Two things aren’t featured in the film – first and foremost, the band themselves. They’re clearly a current that runs through the documentary, their music runs through the film throughout and their images are plain as day on posters, t-shirts, sketches and all manner of personal tributes in the bedrooms of the profiled fans, but there’s no interview footage here. Their absence makes the enthusiasm of the fans all the more powerful in many senses. The other thing that’s missing are the fans who collect each and every format of every record the band have released, from every country they’re released in. By focussing on the impact of Depeche’s live shows, it highlights the powerful way that concerts – or even fans dancing to concert footage in nightclubs – can bring people together, reminding me of something I once heard about fans being more interested in going to Depeche concerts to sing along rather than hear the band play.

Our Hobby Is Depeche Mode has never been officially released, though it is screened occasionally. The precise reason why Mute have never issued it remains something of a mystery to Deller and Abrahams, though I have heard a rumour that despite the band liking it, there was some pressure behind the scenes to prevent it from being released. The pair even compiled a whole series of extra interviews with artists who were influenced by Depeche Mode, including techno pioneers Derrick May and Kevin Saunderson, the idea being that these would appear as bonus features on a DVD release. It remains a real shame, almost a tragedy of Russian proportions, that such a vivid and affectionate overview of what this band means to many people won’t get seen or appreciated by more fans, many of whom will find reflections of their own reasons for being attracted to the band mirrored in the stories here. 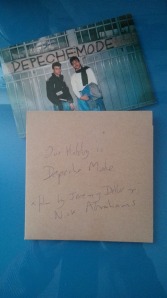 Thanks to Jeremy and Nick for the DVD copy of the film for this review.

1 thought on “Jeremy Deller & Nicholas Abrahams – Our Hobby Is Depeche Mode / The Posters Came From The Walls (Mute Film, 2007 – unreleased)”