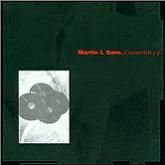 Counterfeit was Martin L. Gore‘s first solo release outside of Depeche Mode. A collection of six covers ranging from The Durutti Column to Sparks, Gore’s voice is here allowed to shine through rather than being relegated to backing vocals or only appearing on the more poignant ballads of the Depeche back catalogue that were less suited to nominal frontman Dave Gahan‘s vocal style. Counterfeit was produced by Gore and Rhythm King stalwart Rico Conning, and released by Mute in 1989 while Depeche Mode were on downtime between the Music For The Masses and Violator albums. Never a band to go for cover versions (off the top of my head I can only count three, including one Beethoven piece), hearing Gore delivering other people’s songs is something of a rare, and absorbing, proposition.

Opening with a cover of Joe Crow’s ‘Compulsion’, things start off in relatively upbeat territory. Sometime Nightingales member Crow’s solitary and pretty obscure Cherry Red 7″ is here delivered as an affirming, strident track, all upbeat pianos, pulsing percussion and melodica-style synths. I used to listen to this occasionally after disappointing events took place (usually getting dumped by a girl), the ‘got to move on sometime’ refrain and the gentle piano somehow allowing me to transcend whatever I was feeling miserable about. Nearly twenty years on from when I first bought this, it still never fails to work. ‘In A Manner Of Speaking’ was originally recorded by Tuxedomoon and appeared on their Holy Wars LP. Gore’s version includes a vaguely Latin rhythm in the style of Depeche Mode’s ‘To Have And To Hold’ from Music For The Masses, underpinned by a dark synth bass pulse. ‘In A Manner Of Speaking’ is filled with a theatrical drama, and to add to the mood Gore speaks his way through the final section, its elliptical lyric about telling someone everything by saying nothing making a level of sense on an emotional level.

The cover of Factory Records’ stalwart Vini Reilly’s ‘Smile In The Crowd’ again opts for a Latin-style arrangement, a thin, pondering guitar line running throughout most of the track. This cover of the Durutti Column song is perhaps the closest Counterfeit comes to the bleak, inward-looking balladry that Gore’s own performances on record tend to lean toward. Meanwhile ‘Gone’, originally delivered by The Comsat Angels, has a cloying urgency, mining the same vibe of danger and helplessness that powered ‘A Question Of Time’, riding forth on a pulsing beat marked by thick bass notes and industrial tension.

Gore’s cover of Sparks’ ‘Never Turn Your Back On Mother Earth’ finds Gore taking Ron Mael’s beguiling, simple ode to the planet we live on and maintaining that sense of grace over a fragile, gentle backdrop of acoustic guitar and shimmering percussion. Tempted to make this plaintive song a whole lot darker though you might have expected Gore to be, instead the sense of wonderment of the Sparks original is maintained, Gore even having a decent crack at Russell Mael’s falsetto, highlighting the lead Depeche Mode songwriter’s strong vocal range. Gore saves the darkness for his take on the traditional song ‘Motherless Child’, here cast as a edgy jazz number, the dark swing of Gore’s introspective vocal delivered like an unused track from Cabaret.

Counterfeit is a relatively unassuming record, considering how big Depeche Mode had become by this point. Gore’s emotional outpourings have always been popular with fans (check out the deafening cheers after one of Gore’s solo performances in the middle of a Depeche Mode stadium show), and hearing his effortless ownership of these six songs is one of the genuine highlights of his body of vocal work. A follow-up to this EP would be released by Mute in 2003 containing more unexpected reworkings of other bands’ material.