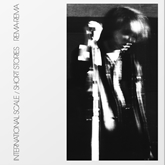 ‘Can you imagine what these beautiful songs would sound like if we’d done them in a 24-track recording situation?’ ponders Gary Asquith by email when I let him know that the copy of Defiant Pose Eight with its accompanying Rema-Rema 7″ he sent me has arrived. ‘It’s so sad that the most beautiful creations that I’ve ever made are just demo quality-lo-fi. They’re the pinnacle of my musical thinking.’

Rema-Rema’s recorded output, until the release of this 7″, was confined to the Wheel In The Roses 12″ that effectively properly launched the 4AD label; apart from a couple of live tracks on a very underground cassette and an alternative version of one track on a Japanese 4AD compilation, that was it. And yet, as future Wolfgang Press member and Rema-Rema founder Mick Allen recounts in the interview with him and Gary Asquith in the Defiant Pose fanzine, this post-punk unit seemed to have developed a cult following that even these two members are surprised about. Allen recalls Nick Cave talking to him about his time in the band whilst his Bad Seeds were on tour with Allen’s Wolfgang Press, and Steve Albini‘s Big Black covered one of their tracks. I can vouch for their status: when I posted a review of Wheel In The Roses last year, including some insightful information from Asquith, I received emails from people enquiring about whether the band had any other recordings that might see the light of day.

Which brings us on to the exciting prospect of two hitherto unheard Rema-Rema tracks, rescued from cassette demos and pressed onto heavyweight vinyl to accompany the Defiant Pose feature and interviews. ‘International Scale’ is a breathtaking moment of sparse robotic motorik rock underpinned by squealing synths from Mark Cox, a taught, sinewy guitar riff from Marco Pirroni and a Mick Allen bassline that dominates with ground-out, low-slung angsty prominence. Asquith prowls above the mix, his vocal somewhere between punky snarl and wide-eyed wonder, offering repeated phrases and complex wisdom. Like all the best post-punk this feels like a head-on collision of ideas: the edginess of punk and the regimented rhythms of German electronic pop (thanks to a skeletal beat from Max) and a leaning into artsy esoterics. It’s not hard to see why Asquith considers his Rema-Rema period his best – ‘International Scale’ suggests a raw confidence and effortless cache of ideas that could have served this band very well had circumstances been different. It’s a travesty of grand proportions that we’ll never get to hear a finalised version of ‘International Scale’ but this is more than adequate aural evidence of what makes Rema-Rema so compelling a proposition.

‘Short Stories’ clocks in at just under two minutes and has a much rawer, embryonic sound to it, Asquith sounding not dissimilar to Wreckless Eric with an emotional, almost anguished vocal. Slow, gravelly and murky, ‘Short Stories’ feels like a single evolution away from the pure punk of The Beastly Cads / Models and Manic bands from which Rema-Rema were formed. No surprise, perhaps – in the accompanying interview we learn that Allen and Asquith brought fragments from unused songs from their former bands to the studios as the genesis for the Rema-Rema material.

Asquith turns more sanguine as our brief email exchange concludes. Hey, we have these moments and we get respect – because you can’t be in a band with Marco Pirroni and Michael Allen playing guitar and bass that isn’t worth a listen. Because those two people exude class. That’s the moment I live for, and when I die I will say “please God, can we cut a deal and you play me some Rema -Rema?”‘

Get it at Defiant Pose

7″:
A. International Scale
B. Short Stories