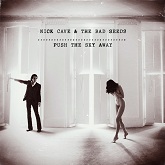 Push The Sky Away is the first Nick Cave material to emerge since he parted company with Mute in the wake of his terminated Grinderman project, and the first Bad Seeds album since 2008’s Dig!!! Lazarus Dig!!!. Now bereft of long-term arranger Mick Harvey, the Dirty Three multi-instrumentalist Warren Ellis steps in and takes the role vacated by Harvey; since 2007 Ellis’ playing has filled the void left by Blixa Bargeld‘s guitar, he was Cave’s foil in Grinderman and the pair have realised several soundtracks together, showcasing a symbiotic relationship that has produced some of the best material in Cave’s back catalogue.

It’s precisely thirty years since the volatile young Nick Cave formed The Bad Seeds in Berlin following the demise of post-punk’s ravaged Birthday Party. Much has changed. Aside from a surprise reappearance of original Bad Seeds bassist Barry Adamson on two tracks here, not one of the original Bad Seeds line-up features in the group that bears the name today, but the core group of musicians that have been with Cave the longest remain in situ – Warren Ellis, Jim Sclavunos (percussion), Thomas Wydler (drums), Martyn P. Casey (bass) and Conway Savage (piano, organ). The fire and brimstone seems to have been exorcised effectively by two raucous Grinderman records and the Dig!!! Lazarus Dig!!! album in the middle, leaving Cave and co focussing more or less completely on the beautiful melancholia of the more serene moments of Abbatoir Blues / The Lyre Of Orpheus.

Your reaction to Push The Sky Away will thus depend on whether what you want from Cave is howling, just on the edge of being out of control blues-informed punk, or the mature ideology that has coincided with the establishment’s embrace of Cave as one of the finest songwriters of the past thirty years. If the former is what you’re looking for, you’ll be disappointed, since Push The Sky Away generally has the slightly maudlin atmosphere that provided the mood on The Lyre Of Orpheus‘ closing track ‘O Children’; all of which is fine, but as anyone who’s listened to the Velvet Underground’s lovely third album for a while will tell you, sometimes you just want to hear ‘Waiting For The Man’. The closest Push The Sky Away gets to anything like the Cave of his earliest Bad Seeds work is on ‘Water’s Edge’ or ‘We Real Cool’, where the growling bass that dominates the low-end reminds listeners of the apocalyptic ‘Tupelo’ from The Firstborn Is Dead. The rest of the album is delicate balladry, with almost psychedelic arrangements (such as the ephemeral title track), quiet musings and bewildered observations on subjects ranging from mermaids to Wikipedia to teenagers cavorting carelessly on the beaches of Hove outside Cave’s window. In the press release, Cave describes Push The Sky Away thusly: ‘I don’t know, this record just seems new, you know, but new in an old school kind of way.’

That sense of the ‘new’ comes through in the remarkable palette of sounds deployed on the album, much of it purportedly derived from loops prepared by Ellis. With Mick Harvey gone and Cave seemingly unwilling to pick up a guitar after Grinderman, the album is largely devoid of any six-string action, with only the stand-out ‘Jubilee Street’ carrying anything close to a guitar line. Ellis shines through as effective lead musician, tracks filled-out with his loops, violin, mandolin and other assorted instruments. The rest of The Bad Seeds literally seem to play second fiddle to the dominance of Ellis, offering up loping basslines, intricate percussion and sprinkles of beautiful piano. Nevertheless, it’s reasonably clear – and not necessarily a bad thing – that Ellis is the primary mood-maker here. The upshot is some of the most advanced music that the Bad Seeds have ever realised, often bordering on a sort of synth music offshoot that no-one has named yet.

Cave’s singing has matured into a distinctive, varied and considered voice over time. The rough edges are all completely gone, leaving a honey-coated rasp that feels a long way from the guttural bleatings of the Cave of the past, hunched over a microphone in apparent pain, spitting words and sibilant sounds forth like a man possessed. The pretty ‘Wide Lovely Eyes’ Cave – with Cave observing the funfare being dismantled and images of departure set to a backdrop of shoes being arranged carefully on a pebble beach – sees the beautiful pairing of Cave and Conway Savage reminding us of some of the most brittle moments of the Bad Seeds catalogue, wherein the tenderness long ago replaced the anger; on this and a number of other songs, Cave reminds me of Ed Harris’s character in The Hours, sat in his window watching the world go by, a resigned, tired air colouring proceedings.

The frontman reprises some of his humourous bluesy story-telling and diverse intonations on the obscure centrepiece, ‘Higgs Boson Blues’, namechecking everything from Hannah Montana / Miley Cyrus, Wikipedia, Robert Johnson, vague mythologies and Switzerland’s Large Hadron Collider; that and ‘Jubilee Street’ are the clear highlights of the album, both being the most fully-formed and musically complete pieces here. The former has a skittish, absorbing jazz-blues dimension; the latter has a rousing, slowly-developing mix of lovely rolling drums, acoustic guitar, percussion, full orchestration and a muted intensity as Cave rises up into the sky toward the end in angelic contrast to the devilish way he flew forth in ‘Mutiny!’ back in the day. ‘Jubilee Street’ (which may or may not be set on the much-altered street in Brighton now devoid of any of its original charm) has a strong and compelling narrative, touching on the darker side of life with a bleak tale of what sounds like a prostitute who gets moved on from Jubilee Street by Russians.

The rest of the album is sonically clever and absorbing, even if Cave sounds like he might be sleepwalking through his songwriting at times. Nevertheless, he’s managed to produce some truly lovely songs as well as a new-found observational capacity in tracks like ‘Water’s Edge’, wherein the opposing forces of London girls looking for a good time and local boys looking for something to do clash; like Quadrophenia for vampires and party girls. There’s also moments where his particular brand of Viz-style smuttiness and wry humour shine through. Overall, it feels like Laura Ashley wallpaper – nice to look at, perfectly inoffensive and fine in the background, but you wouldn’t decorate your whole house with it.

Thanks to Rhian at Big Mouth.

I’m reposting this on the occasion of the Push The Sky Away receiving the prestigious Ivor Novello Album Award, an incredible achievement for both Nick Cave and his publisher Mute Song.

Cave has deserved greater recognition for his songwriting for far too long, and I’m delighted that the rest of the music world seems to have caught up with those of us who always knew where his songs would ultimately take him. I just wish that it had been another album that had secured him that recognition; a year on, I still haven’t warmed to this album, and I personally feel that there are far better works than this in the Cave back catalogue.