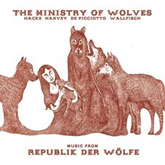 Republik der Wölfe is a theatre production commissioned by Theatre Dortmund’s artistic director Kay Voges and directed by Claudia Bauer which premiered on 15 February 2014. The music for the production comprised collaborations between Mick Harvey, Alexander Hacke, his girlfriend Danielle di Picciotto and Paul Wallfisch. Harvey is a veritable Mute stalwart given his tenure with bands like The Bad Seeds, and as a multi-instrumentalist and producer he has a reputation as being a highly skilled and versatile addition to any line-up. Hacke is a veritable Goliath – in both stature and reputation – who formed a crucial component of the noise onslaught of Einstürzende Neubauten and found himself offering a more nuanced role in Simon Bonney‘s Crime & The City Solution. Di Picciotto is an accomplished artist who formed part of the new Crime lineup that released American Twilight in 2012, and whose live visuals accompanied that album’s tour. Keyboard player and singer Wallfisch is founder of the New York group Botanica, a group whose music is variously described as ‘gypsy and punk-cabaret infused chamber rock’ and who have collaborated with Kid Congo Powers, another Bad Seeds alumnus.

The music takes its principal inspiration from the fairytales of Jacob and Wilhelm Grimm, the stories of whom will be familiar to more or less any child albeit viewed through a distinctly Disneyfied lens. The original stories by Grimm were a mix of the ethereal and macabre, drawing inspiration as much from folklore as the frighteningly original imagination of the two brothers. (By way of a recent anecdotal footnote, I was in a shop in the Germany pavilion at Disney’s EPCOT last month where they had copies of the collected Grimm tales for sale. Two Americans next to me were dumbfounded as to why these fairytales were in the Germany pavilion, so co-opted have they been by Hollywood over the past century that they are regarded as quintessentially American in origin.) Just like the original fairytales on which they are based, the music written by this group has an authentic air of dark mystery, sorcery and otherworldliness, making for an original body of work that exists happily – if strangely – without the visuals for which they were intended.

First, let us deal with the songwriting. My only real awareness of the original Grimm fairytales come from a combination of the sanitised Ladybird books and Disney movies of my youth, and my two daughters’ enduring fascination with fantastical princesses and mythical creatures. Consequently I have no real understanding of what the band are going on about here, though it’s clear from titles and some of the subject matter as to which particular story they are dealing with. Whether in the ethereal spoken word tracks from di Picciotto, the fragile double-tracked musings of Mick Harvey or Alex Hacke’s ominous intonation on ‘Rumpelstiltskin’ the guts of the story are evident, even to an ignorant like me. Only, the tone here is fundamentally dark, linking the songs to the original stories albeit through a thoroughly contemporary lens – the mischievous dwarf Rumpelstiltskin wasn’t, as far as I can tell, ever exhibited at a Coney Island funfair, for example. The whole thing is shrouded in a sinister, almost violent mysteriousness, knocking for six most versions of these tales.

Next, consider the music. Neither Harvey nor Hacke are strangers to composing music for theatre, and both Neubauten and Harvey (with Nick Cave) have albums in the Mute back catalogue that were commissioned for plays. Between the two of them their sense of space and detail is second to none, and when combined with Wallfisch’s piano – somewhere between bar-room blues and jazz – the whole thing swings with a depth and inventiveness that is in many ways more interesting than making sense of the vocals. An obvious reference point would be The Bad Seeds between Tender Prey and Let Love In (‘The Little Peasant’ even has ‘Red Right Hand’-esque organ vamps), but there’s also a relaxed, jazz-inflected dimension here too, cutting gently through the gloom. The start of ‘Cinderella’, with di Picciotto on vocals even sounds a lot like ‘The Carny’ from Cave’s The Firstborn Is Dead. For this reviewer the highlight is ‘Little Red Riding Hood’, a edgy stew of droning guitars, grungy vibes and a storyline delivered in German and English by Wallfisch that seems to relocate Little Red to a New York gangland scene.

Above all, this is an inventive album based on an interesting concept, produced by four individuals who, in their own right, are incredibly talented but who together can create something very special indeed. My only gripe is that it feels like this music really needs its visual dimension to completely make complete sense of this theatrical offering.

Listen to ‘Rumpelstiltskin’ and watch di Picciotto’s making-of documentary below.