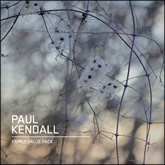 Family Value Pack is the follow-up to 2011’s Angleterror (CatWerk Imprint) and finds Paul ‘PK’ Kendall on typically inventive form. Kendall has always been capable of manipulating technology, whether that be as an engineer, on his own recordings or through his countless remixes for the Mute roster and other artists, and Family Value Pack is no different: this is a super-sized audio trip filled with complex twists and turns and strange juxtapositions.

At the heart of this album is a thoroughly plunderphonic vibe, a series of controlled explosions of sound sources set off against one another and the results carefully documented and presented across the seven tracks presented here. Some may argue that the result is a sprawl, a messy stew of grating rhythms, uncomfortable phrases and harsh dissonance, and that isn’t a million miles from what it really sounds like. But what makes Family Value Pack an album worth persevering with is the depth of vision.

Tracks like the buzzing, hyperactive opener ‘Scuba Dis Dat’ take a familiar rhythm notion – on that track the beloved 4/4 beat-grid of techno – and thoroughly twist it into new shapes, creating a sonic gumbo of seemingly incompatible elements, in ‘Scuba Dis Dat’ those being fuzzy guitar riffs, skronking sax solos, dubby happenings and snatches of Kendall reading what sounds like some sort of heavy, expressive poetry. It is restless, certainly, but that’s no bad thing. Elsewhere the vibe is one of muted ambience or beds of glitchy electronica, all tied together by Kendall’s evocative and imaginative word pictures and his accomplished sense of space and texture. Every sound feels like it was created or delicately positioned within a mix so as to maximise its emotional and sonic impact, feeling more like a soundtrack composer’s work in intricate sound design than an electronic music album. ‘Family Value’ is a clautrosphobic piece of electronic musique concrete, all hissing and clanking noises, underpinned by a harrowing sound that sounds like breathing – if that sounds like an Eraserhead-esque exercise in industrial terror, a segue into a small child singing is a careful gesture that heightens the dark mood perfectly.

The amount of detail here requires repeated listens and patience to fully appreciate. ‘It’s OK’ is a lot like watching a time-stretched film of a high rise tower ascending upwards; in the first few minutes it’s all about deep excavations or putting in foundations, all of which is necessary for the building to take its final shape but not as attention-grabbing as the building rising up vertically floor by floor. In the case of ‘It’s OK’ the first half is all about individual sounds and tentative structures, those foundations finally leading to the rhythm and atmosphere that takes the track through to its final ascendant form. Without patience you’d miss the conceit completely, and it’s a trick that Kendall pulls off repeatedly on this album.