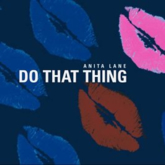 I actually felt quite embarrassed listening to this second single from Anita Lane‘s appallingly-titled Sex O’Clock. Not because it’s a terrible track, far from it, but because the lyrics are so overtly sexual (example lyric: ‘Call me up on the erogenous zone / All night kundalini telephone.‘) – it is a bit like how uncomfortable you felt as a teenager when the passion levels rose a bit too high in a film you were watching with your parents. Or maybe that was just me.

The solitary B-side ‘Look At The Sun’, co-written and produced by Johnny Klimek, is a countrified ballad, a thing of remarkable beauty. Lane’s vocal is perfect for the track, which really draws out the emotional quality of the song. In fact, the song could have been delivered just as successfully by her former beau Nick Cave.