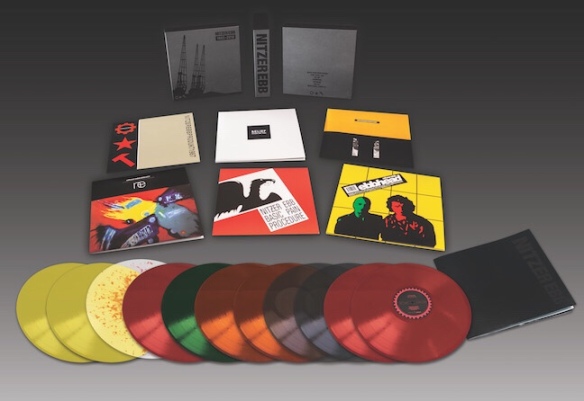 Nitzer Ebb is a band whose music dominated my teenage years. My happiest moments may have been soundtracked by Erasure and my uncertain adolescence by Depeche Mode, but it was Nitzer Ebb that I turned to when I was angry and full of rage. Had I been less scared of guitars I might have found that rage vented through Nirvana’s Nevermind like all of my friends instead of the lurid Ebbhead in 1991, but I remain forever thankful that it was Douglas McCarthy and Bon Harris that I trusted with my bitterness.

More or less all of Nitzer Ebb’s output – from their self-released Basic Pain Procedure collection to 1994’s anguished-but-brilliant Big Hit – are now the beneficiaries of a deluxe vinyl reissue boxset courtesy of Pylon Records. Over expanded double LP editions, Pylon have added rare and forgotten mixes to the albums, lovingly restored the original artwork and put back into circulation five important records from the Mute back catalogue that have been out of print for years.

Head to www.pylonrecords.com to pre-order one of two available editions of the boxsets. 1982-2010: The Box Set will be released on October 5, 2018.

Postscript: after a link to this post appeared on Twitter, the official Mute account responded “Mute Ebb catalogue release news coming soon!” I don’t any more than that, but it tantalisingly hints at a separate reissue programme from the label that the band called home for most of their career. Further details will be announced soon, I hope.