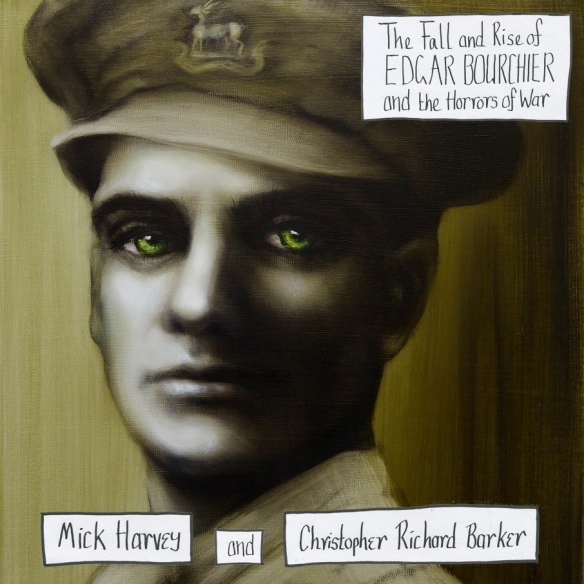 “With each year that passes there are fewer and fewer of us who have a direct connection to those who lived through the two world wars.” Those were the words of our town mayor at this year’s Remembrance service in Woburn Sands, before he solemnly read out the names of those from here who had lost their lives, leaving an indelible mark on this small community with whole generations of family members eliminated.

Over the years their short lives and contributions are reduced to an etching on a war memorial that few of us even notice other than at the annual Remembrance service. Upon the occasion of the hundredth anniversary of the end of the Great War, the sacrifice of over a million British service personnel is – rightly – prominently back in focus, serving as a salutary reminder of war’s devastating consequences.

Edgar Bourchier didn’t serve his country in the First World War, at least not outside the imagination of author Christopher Richard Barker anyway. The poet and soldier Bourchier is a fictional character that Barker first created for his 2012 novella The Melancholy Haunting Of Nicholas Parkes, fabricating his Warwickshire birth and Passchendaele death and a vivid backstory of how his poetry took on an entire life of its own following his demise. That include a never-realised Weimar cabaret show, the re-discovery of his words during the turbulent Parisian revolution of the Sixties to ‘new’ realisations his (Barker’s) poetry with Mick Harvey. The Fall And Rise Of Edgar Bourchier And The Horrors Of War is thus a conceptual tribute to the endeavours of an Unknown Soldier that never actually existed, but whom speaks for a whole generation of conscripted boys.

Harvey’s experience as a producer, vocalist and a multi-instrumentalist lends these songs the requisite sensitivity, drama and horror to evoke the realities of life in the trenches, all seen from the first-hand vantage point of a contemporary observer. Veering from wistful, mournful folk on tracks like ‘Listen In The Twilight Breeze’ to distorted, feisty rock on ‘The Last Bastard Son Of War’, this is an album inevitably loaded with dramatic, thought-provoking moments. Harvey leads an ensemble cast including his long-time collaborator JP Shilo, vocalists Jade Imagine, Alain Johannes and Simon Breed across fifteen stirring tracks written collaboratively with Barker. Through these songs we hear the hatred of the footsoldiers toward their stiff upper-lipped superiors and their natural reluctance at finding themselves defending their country in spite of the hollow promises of glory and prosperity.

‘Softly Spoken Bill’ observes a callow young soldier thrust into the role of unwilling cannon fodder, losing the plot as he legs it toward the enemy and ultimately getting sent back to Blighty suffering from an early, undiagnosed, wilfully ignored form of PTSD. That effect on these young men can be heard again on ‘The Expressionist Tell #1’ and ‘#2’, describing the numbing, hollowed-out impact that barrages of mustard gas and incessant mortar fire would have on even the most resolute of individuals, reducing them to ghostly human shields in the name of a greater peace.

To call this harrowing would be a pointless understatement, even as Bourchier’s narrative moves from a sort of forced jingoism to the terrifying, cloying sound art of ‘The Messenger’, in which we hear of the falsehoods of life on the frontline that were forbidden from being reported back home.

As time passes and collective memories fade, we need such honest, unflinching descriptions of the manmade hell-on-earth of war to lead us not into the temptations of conflict as our only means of resolving differences. At a time when ugly, incendiary rhetoric between nations is at an all-time high, as peacetime defence spending is increasing, and as Cold War treaties and agreements are unilaterally scrapped, we need the likes of Bourchier’s posthumous words more than ever – irrespective of their false providence – lest we forget.