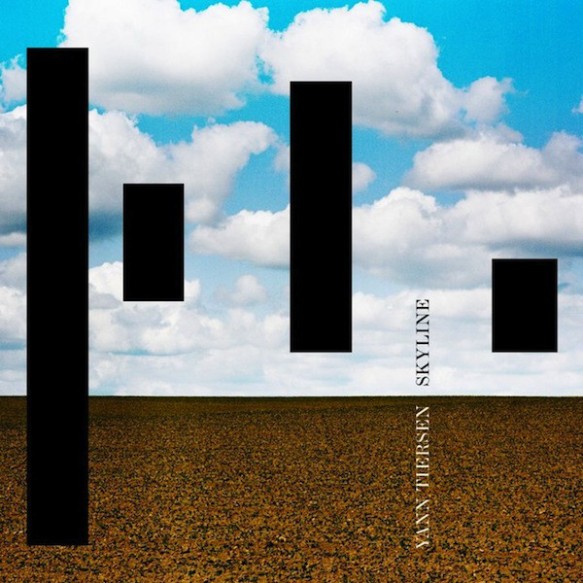 I’m almost ashamed to say that Skyline was my first exposure to the work of Yann Tiersen; for reasons that I barely understand, I’d managed to avoid buying Dust Lane, the 2010 album that preceded this one and which brought Tiersen to the Mute family. Prior to the ‘Monuments’ and ‘I’m Gonna Live Anyhow’ singles, the only Tiersen song I’d ever heard was ‘The Gutter’, included here, which featured on Mute’s Record Store Day compilation, Vorwärts. If my comments on ‘The Gutter’ were tentative, that was because I didn’t have the foggiest idea how to describe a track which seemed to contain so many inherent contradictions – was this low-key industrial soundscaping? The soundtrack to a particularly strange movie? Indicative of Tiersen’s work generally or some tiny experimental vignette filled with unexpected drama? All I knew was that I liked what I heard.

The album is packaged in beautifully oblique artwork from Frank Loriou which sees blocks of heavy black, monolithic colour pasted over more quotidian imagery, creating a visual contradiction which is the perfect expression of the nine very complex pieces – I refuse to call these songs, or even tracks – contained on Skyline; each of the pieces is laced with some sort of unexpected, unanticipated sonic event – a drum beat coming out of nowhere, harsh synth sounds, ear-pummelling guitar distortion, layers of chattering voices – which totally destroys your perceptions of the song up to that point. ‘My plan,’ says Tiersen, in Skyline‘s press release, ‘was to play with [the] contrast between electric and quite dense parts and more sober and minimal quiet parts including piano and strings.’

Skyline, his seventh album, was recorded by Tiersen in places as diverse as San Francisco and the tiny island of Ouessant / Ushant before additional contributions from an array of adept collaborators was added, including Dave Collingwood on drums and various vocalists including Efterklang on the closing track ‘Vanishing Point’, while Tiersen is credited with – deep breath – toy piano, bass, guitar, various synthesizers, vocals, drums, Mellotron, accordion, piano, strings, glockenspiel, vibraphone, bouzouki, mandolin and marimba. The album was then mixed in Leeds by legendary producer Ken Thomas, who also worked on S.C.U.M‘s Again Into Eyes for Mute.

That contrast between the noisy and the pastoral is showcased brilliantly in the opener, ‘Another Shore’, wherein tinkling bells, pretty acoustic guitar and a distant hip-hop style beat usher the track gently forth; only just as you’re getting comfortable with the chilled-out atmospheres, angry guitar and aggressively beautiful chord changes suddenly rip right through the mood, creating soaring waves of melodies. The track suddenly breaks down into quietude again, with rasping bass clarinets (played by Stéphane Bouvier) emerging from the background like they’ve come straight from the Screamadelica rehearsal tapes. ‘Another Shore’ is a busy, densely-layered track fraught with conflicting emotions, arranged around that midpoint between the harrowing and the rapturous. At its conclusion, the track just falls away, leaving nothing more than dirty drones before the seamless drop into the second single ‘I’m Gonna Live Anyhow’; that change of pace is somehow a welcome respite as ‘Another Shore’ could take your emotions too far.

Similar effects happen on ‘The Trial’, which begins with shimmering, pretty sounds, and almost cutesy textures, subtle horns, and tender vocal harmonies. It feels like the component parts of a raging Philip Glass sequence only taken apart with only the slightest essence of the original work presented for the listener. Halfway through, sharp noises prick the silence, euphoric guitars and droning synths arrive and a plaintive vocal drifts in over a distant beat, all of which reminds me of Neu! for some inexplicable reason.

The album’s closer, ‘Vanishing Point’, displays a similar approach: the vaguest of motorik pulses, an essence of a much more obvious Krautrocking rhythm, over which nervous synths and tribal vocal sounds coalesce into a feisty, but not unpleasant affair. Rapturous, almost wordless voices loop over the top as typically clattering, disjointed percussion sounds drive a wedge through the very heart of the track. ‘The Gutter’ contains haunting, creeping evolutions, filled with delicate if ambiguous singing from Gaëlle Kerrien and a sweet organic quality which is only marginally offset by the grainy spoken word samples muttering away in the background. Crashing drums and mournful violin back the implied futility ingrained into the chorus – ‘try to reach the sea‘ – while Nineties techno synth sounds rise out of nowhere above plaintive piano echoes to take the track to an unexpected conclusion.

Elsewhere things get sonically threatening. ‘Exit 25 Block 20’ contains distorted shouting, yelps and very unfriendly industrial noise rising above music box sounds, folksy guitars, whining synths, chattering voices (including swearing from Third Eye Foundation / This Mortal Coil’s Matt Elliott) and a beat that spends the entire track fighting its way through the layers of sonic sludge and layers of sound just to reach some sort of crashing closure. Yet despite its howling, dark depths, pleasant melodies somehow find their way to the surface.

‘Hesitation Wound’ consists of echoing Spanish guitar, buzzing bass synths, and stuttering, disembodied vocals. It feels like an early wax cylinder recording picking up voices from the afterlife and recorded in a particularly cavernous cathedral. ‘Hesitation Wound’ is spooky, maudlin and unpleasant, and if it wasn’t for the layers of reverb and general air of strangeness, it would probably sound quite operatic.

A similar sense of feeling disturbed or uncomfortable comes through on ‘Forgive Me’ which rides in on grungy guitar strumming while plucked notes from what sounds to me like the neck end of the guitar ping away to themselves. Whining guitar textures cruise in over the jangly rhythm, and for a brief moment I can’t help myself and, despite not wanting to labour any sort of cheap point about Tiersen’s music being ‘filmic’, this feels like a soundtrack to some sort of epic moment in a Western they haven’t made yet. At that very point, the nucleus of the track is revealed, with a repeated request for forgiveness from a massed choir of voices, almost as if this whole longform, chaotic, hyperactive, shambling piece was just created to say the simple words ‘I’m sorry‘. There is a towering grandeur to this, one of the album’s longer pieces, and as the song progresses toward its conclusion that need for forgiveness feels ever-more desperate and insistent.

In addition to LP+CD, CD and digital formats, Skyline was released as a luxury 500-copies-only boxset available from Tiersen’s own website. The boxset includes a signed Skyline LP+CD, an exclusive T-Shirt featuring a Skyline ‘Monolith’ print in bright orange on white, a Skyline ‘Monolith’ stencil, a hardback photo book featuring an exclusive collection of personal behind the scenes photographs and Skyline artwork by Frank Loriou, and an A4 poster, all housed in a numbered box.

First published 2011; edited and re-posted on the occasion of reaching 444 likes for the Documentary Evidence Facebook page, 2019 (Skyline is stummm444).