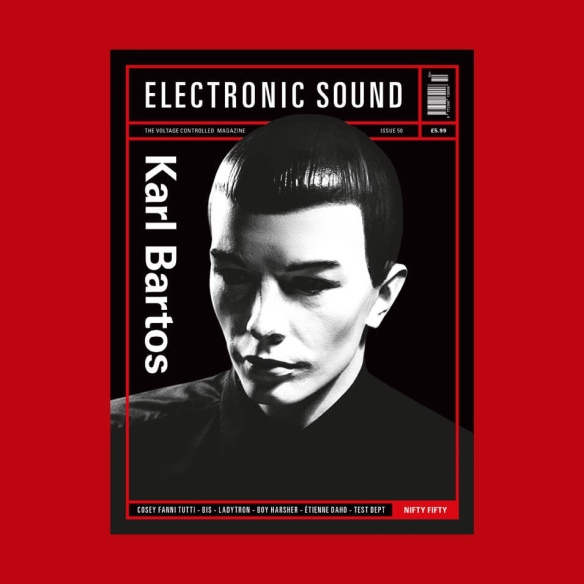 The new issue of Electronic Sound is now available, and this one is rather special. Initially available as a bundle with an exclusive Karl Bartos 7-inch (now sold out), this month’s magazine marks Electronic Sound‘s 50th issue.

Pulling off a specialist print title at a time where most people seem to think the future is digital paper is no mean feat. Indeed, Electronic Sound started life as an iPad-only magazine before realising that there was a gap for a beautifully-executed, smartly designed item created by an editorial team with intense passion and specialist knowledge of the subject matter the magazine covers. If it seems vaguely oxymoronic that a magazine celebrating music made with technology should find its niche as a resolutely analogue offering is because it is, and it’s all the better for it.

I joined the writing team for Electronic Sound in 2014 with a review of Apt’s Energy, Light & Darkness, back when the magazine was still a digital title. That I wrote this review at all is entirely down to the magazine taking a chance on me when I approached them, and that chance arose simply because another writer had let them down that week; that left them with a gap that needed to be filled at short notice, and they trusted me with the job, for which I am unendingly grateful. I figured it was a one-off, but I have written for them ever since. It is both a pleasure and honour to do so every month, and to play a small part in this wonderful magazine’s success and it’s broad minded approach to electronic music and the many stories that deserve to be told.

For this month’s magazine, I wrote a feature on Mattel’s weird 1970s home keyboard, the fabled Optigan, an instrument using optical discs that was meant to usurp the humble organ but didn’t.

The impetus for this piece arose through my good friend Reed Hays, who used the Optigan’s cousin, the Orchestron, on last year’s Reed & Caroline album Hello Science. Reed introduced me to his friend Pea Hicks – the foremost expert on the strange birth, life, death and resurrection of the Optigan – and his band Optiganally Yours, whose amazing O.Y. In Hi-Fi I reviewed for Electronic Sound. My editor figured that this was another one of those stories that needed to be told, and I was deemed the writer for the task.

I can’t hope to tell the story as well as Pea can (and does), and I am forever indebted to him his help in putting the piece together. The piece involved contributions from original 1970s Optigan user Alan Steward, former Genesis guitarist Steve Hackett, Tom Waits producer Tchad Blake and Sparklehorse collaborator and Nadine Khouri producer Al Weatherhead, each of whom have been drawn to the instrument’s curious and unpredictable charms over the years.

Elsewhere, I reviewed the fifth volume of Front & Follow’s Blow series, with a remarkable piece of mechanical music by Dunning & Underwood and their Mammoth Beat Organ; the return of Bill Leeb’s Frontline Assembly with Wake Up The Coma; Simon James‘s Musicity 003 Shenzhen / Shanghai cassette of Buchla and field recordings; Blood Music‘s inventive and dextrous GPS Poetics.

I rounded out my contributions with a review of Fond Reflections, a long-overdue compilation of unheard material by Rema-Rema on the 4AD label. The label’s founder Ivo Watts-Russell has oft said that it was the solitary Rema-Rema release, 1980’s Wheel In The Roses EP, that set the benchmark for his label, despite the band already having split by the time the 12-inch was released. The album is released on 1 March and I will be hosting a special Q&A with members Gary Asquith, Michael Allen and Dorothy ‘Max’ Prior at Rough Trade West on the evening of its release.