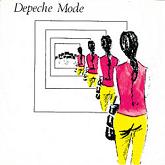 ‘Dreaming Of Me’ was Depeche Mode‘s first single, released by Mute Records in February 1981. Written by Vince Clarke and produced, like Speak & Spell, by the band and Daniel Miller, the track failed to dent the UK singles chart and was possibly a big disappointment for Miller, whose ambition had been to create a good-looking, radio-friendly electronic pop group. The single did, however, top the UK indie charts.

‘Dreaming Of Me’ is a simple, naive example of early electronic pop. Tinkly rhythms, thudding, bouncy drums and an aggressively phased bassline underpin a shouty, butch lead vocal by Dave Gahan that seems, like ‘Photographic’ from the Some Bizarre compilation album, to be concerned with introspection and cameras (very early Eighties). There’s a central melody on the middle eight which sounds like it was played on the same synth Miller used (as Silicon Teens) on his cover of ‘Red River Rock’, and the end section is all wordless vocal harmonies and spoken missives, almost as if the boys realised they needed a few more euphoric pop staples to make the grade. Unlike Miller’s previous works, either as producer of the likes of Missing Scientists or Fad Gadget, or with his own work as The Normal and Silicon Teens, ‘Dreaming Of Me’ has a clean sound and none of the rough edges associated with those other works.

‘Ice Machine’ signals that Depeche Mode always had a germ of darkness inside them. Imagine Metropolis’s dystopian landscape being transferred instead to the Ford plant in Dagenham and then imagine Kraftwerk providing the soundtrack; even that doesn’t come close to this almost industrial piece. There’s a stalking bassline and a fluttering, spiralling background melody that I’m sure Vince Clarke would go on to use again on Yazoo‘s Upstairs At Eric’s; clattering percussive sounds and whining, almost droning synths dominate the foreground. It is the sound of a brutal, grey production line but does seem to stretch out towards some sort of vague euphoria at the very end.

Note that I’ve not included ‘Dreaming Of Me’ as a single from the debut Depeche Mode album, Speak & Spell, which was released much later in 1981, as it wasn’t actually included there (though it did appear on the US version instead of ‘Sometimes I Wish I Was Dead’). The 1988 CD reissue of the album tacked the track (and ‘Ice Machine’) on at the end. The version included there is a slightly different mix – much more sparse low end evident underneath the phasing and a non-faded ending. That ending finds the track collapsing in on itself; it’s the type of messing ending that the fade usually rubs out, all dud notes, missed beats and vocals suggesting they’d done enough work that day.

Thanks to David McElroy for his help with this review.