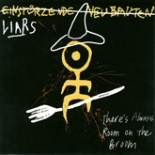 New York’s Liars made their transition from Blast First to Mute with this, their second UK single, and the first track to be taken from They Were Wrong, So We Drowned. A marked change in direction, ‘There’s Always Room On The Broom’ – albeit rather nursery rhyme-esque in it’s title – takes an influence from the paranormal, using German witchcraft mythology to provide its themes. This release comes in a very tongue in cheek sleeve that rips off Einstürzende Neubauten‘s sleeve for Strategies Against Architecture. (Just over ten years after this single was released, I found myself at a Laibach concert in London talking to a member of the Mute team, who was sporting a Neubauten t-shirt, which he said he wire to Laibach gigs just to piss off the band; we got to talking about the pastiche that was created for the sleeve of ‘There’s Always Room On The Broom’. He said that Mute approached Blixa Bargeld to ask for permission to use his original sleeve for Strategies…; apparently Blixa loved it and thought it was pretty funny.)

How to describe this music? Well, on the lead track, an exciting meeting of Neubauten and Sonic Youth wouldn’t actually be a bad starting point. Vocalist Angus Andrew bears a striking aural similarity to the Youth’s Thurston Moore in his early, naive, punked-up deadpan style. Musically, with its breakdown into fuzzy whitenoise and lo-fi percussion – cardboard box rhythms a la Moe Tucker duelling with Neubauten’s N U Unruh – this could be from almost any combination of points along indie rock’s ancestry. Some ghoulish whining reminds you of the Germanic folklore which inspired the album’s creation. Some densely-savaged organ sounds leads you to imagine Clint Boon inside a cauldron with The Lonesome Organist playing devil with a distortion pedal.

Despite its slightly goofy leanings, this is a pretty earnest slab of prime rump post-rock, and if you’re getting bored of that whole flavourless low-carb Strokes / nu-punk-lite nonsense, then this could be just what you need in your diet.