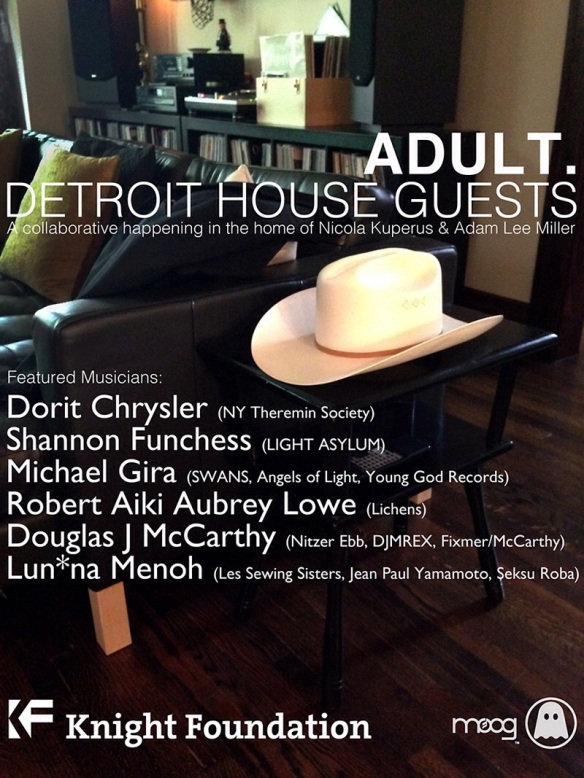 ADULT. have today announced details of a new collaborative project with the musical heritage of Detroit at its heart. “We want this project to bring more positive attention to the city,” says Nicola Kuperus of the duo, referring to the social and economic woes that have left the once proud industrial city ravaged by bankruptcy (Detroit is the first American city to file for the equivalent of a corporation’s Chapter 11 right to creditor protection), poverty and unemployment of a scale befitting a developing nation, not the centre of America’s automotive expansion. “We want this to be a positive, collaborative experience here in Detroit.”

For Detroit House Guests, Kuperus and Adam Lee Miller will invite collaborators into their homes as guests while they record with them. Think of the collaborators as lodgers paying their board with creativity rather than cash. The six collaborators that will work with the duo over the next seven months will be Dorit Chrysler (NY Theremin Society), Shannon Funchess (LIGHT ASYLUM), Michael Gira (SWANS, Angels of Light, Young God Records), Robert Aiki Aubrey Lowe (Lichens), Douglas J. McCarthy (Nitzer Ebb, DJMREX, Fixmer/McCarthy) and Lun*na Menoh (Les Sewing Sisters, Jean Paul Yamamoto, Seksu Roba).

The duo will also provide unmitigated access to the collaborative process through various social media outlets, effectively allowing both collaborator and the public access to their Detroit abode.

The resulting Detroit House Guests album will be released on the consistently fascinating Ghostly International label. The project is supported by the John S. and James L. Knight Foundation.

Listen to Nicola Kuperus describing her aspirations for the project via the video message below.