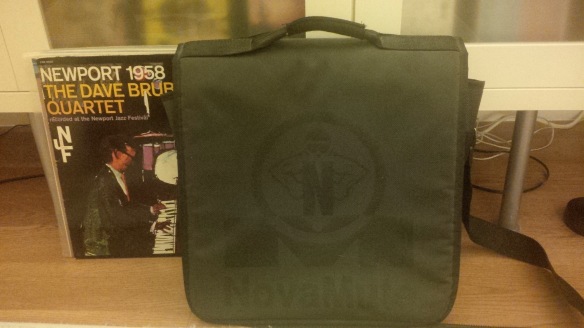 Sometime in 1996 I bought this NovaMute-branded DJ record bag from MuteBank. I think I’d been persuaded after seeing it advertised in the first MuteBank A4 catalogue, Statement #1. The bag in the catalogue has a white NovaMute logo on the front, but when mine arrived it was pure black, with a shiny black logo on the flap. Statement #1 lists the DJ bag with a catalogue reference of MBM31 – MuteBank Merchandise 31.

My plan had been to use this as the bag that I’d use to cart my university texts and papers around campus. Back then you could identify the guys who were into dance music by the record bags they’d lug around, as they’d always be branded up with some funky label or record shop. It was a signal of solidarity. I wanted to nail my colours to the NovaMute mast but when the bag arrived I decided to use it instead for its intended purpose, namely storing records.

The pure black, thick plastic record bag with its shiny ‘classic’ NovaMute logo did its job more than adequately, but I no longer need it. It’s in perfect condition and its age is only given away by the fact that a) NovaMute don’t exist any longer; b) they ditched this ‘classic’ logo in favour of plain text inside a rectangular box several years after I bought this (which was always a shame, I thought); and c) no-one makes bags like this anymore. I think it can hold about 30 12″ records and has pockets under the flap for the random stuff that DJs probably used to carry around to clubs back in the day.

If anyone wants to buy it off me, get in touch. Otherwise you’ll find it on eBay at the weekend. Note that this is the start of a major decluttering initiative on my part, which will see me offloading lots of things, including (I suspect) the bulk of my Mute record collection.