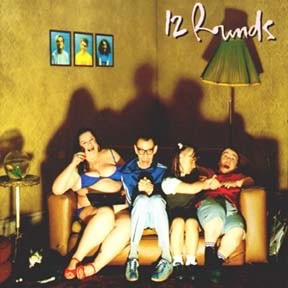 12 Rounds were a mid-Nineties group consisting of future Trent Reznor accomplice Atticus Ross, his brother Leopold, Kirk Hellie and vocalist / front woman Claudia Sarne. Their debut album, 1996’s Jitter Juice was an intense, noisy affair, in thrall to the heavier end of grunge but also tipping its hat toward the pop crossover of Garbage and the lumpen end of the trip-hop oeuvre. In Sarne, the group had a singer capable of singing in a earthy, almost cabaret fashion while also veering into a vampiric, Lydia Lunch howl when required.Jitter Juice saw the band collaborate with a bunch of musicians – Billy McGee (who has worked with Coil, Simon Fisher Turner, Marc Almond, Test Dept., Nick Cave and countless others), Ian Mussington from Soul Asylum, cellist Stanley Adler and Mute stalwart Barry Adamson, who’d also worked with McGee on The Negro Inside Me.

Adamson laid down a chugging bassline for the track ‘Pleasant Smell’, which Polydor released as a single from the album. He also played shimmering, ghostly vibes on the melancholy blues of ‘Strange Daze’. Neither contribution rises above the rest of the arrangement with any particular prominence, suggesting Adamson was comfortable here just being part of the band.

Atticus Ross had already worked with Adamson on his Soul Murder album in 1992 and would go on to collaborate with him many more times over the years, while Sarne appeared on Adamson’s ‘Can’t Get Loose’ from As Above So Below. Other players on Jitter Juice like drummer Andy Crisp were also in Adamson’s orbit. Ross and Adamson would work together on the soundtrack for David Lynch’s The Lost Highway, by which time 12 Rounds were already being feted by Trent Reznor’s Nothing imprint after the Nine Inch Nails man overheard Ross’s group working in the studio. In Ross, Reznor found a producer and writing partner that has seen them become David Fincher’s go-to soundtrack composers.

Jitter Juice might be something of an overlooked footnote in the confused musical landscape of the Nineties, but as an exercise in eclecticism and collaboration, it remains intriguing to this day. It feels like a producer’s album, like Atticus Ross showing off his credentials as a sculptor of sound, working through various styles as an advert for what he was capable of. At the other extreme, the lurid green jewel case this was delivered in was just pure gimmickry.