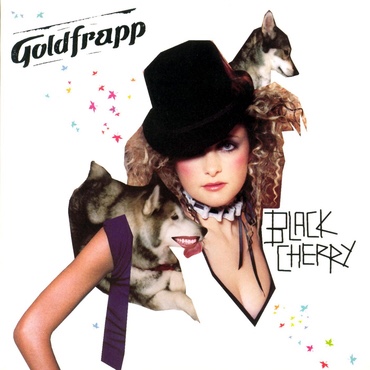 Goldfrapp’s second album finds the duo moving from the chilled ethereal ambience of Felt Mountain into a sort of robotic retro-modernism. There are moments that nod in the textural direction of their debut, such as the serene title track or the beautiful ‘Deep Honey’, but on the whole Black Cherry is a harder, more direct affair.

Black cherry was always the flavour of yoghurt that no-one else wanted from the fridge in our household, a weird vestigial throwback to 70s faux sophistication, no doubt achieved via an array of bitter E numbers; it’s one of those ‘love it or hate it’ flavours, and I guess this analogy works well regarding this album. In many ways, the disparity between Felt Mountain and this may not taste good to some who only bought their debut for its chilled vibe and its placement in the voguish late 90s chill out compilation canon. Personally, I loved black cherry, and I love Black Cherry.

Alison Goldfrapp‘s voice has always possessed a certain sensuality which has the capacity to draw you in and surround you with half-whispered temptations. That tone is best evidenced on the penultimate track, ‘Forever’, which is full of achingly seductive promise, Alison’s captivating vocal expertly accompanied by Will Gregory‘s chastened electronic textures and a sort of Beatles-y psychedelia. Elsewhere, the opener, ‘Crystalline Green’ is a hypnotic stream of words set to a jerky electro rhythm, while the prowling multiple climaxes of ‘Slippage’ that end the album edge forward with a nagging, ‘Nightclubbing’ pace and a large pinch of burlesque noir.

At times, Black Cherry is a thoroughly over-sexed, occasionally grubby affair, with the single ‘Twist’ getting as close as the duo ever dared get to the sound and imagery of Peaches. The gritty square wave-dominant sound that dominates parts of the album is both extreme and a shock to the system after their spell working the ambient torch song ephemerality of their debut. Singles like the glam-infused ‘Train’ and the deftly ubiquitous – yet utterly subversive – ‘Strict Machine’ more or less defined a new, more urgent and confrontational dimension to the Goldfrapp sound, one that allowed them to slip effortlessly – but perhaps unexpectedly – into a new and eclectic early 2000s anything-goes pop movement.

Originally posted 2003; edited and re-posted 2019 to coincide with the vinyl reissue of Black Cherry.