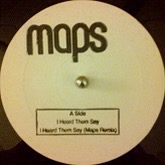 single // I Heard Them Say

‘I Heard Them Say’, the first taster from the third Maps album Vicissitude, was released as an exclusive 100-copy, hand-stamped* 12″ in association with Manchester mail-order outlet Boomkat. Set to become a contributor to the pension plan of a select few record collectors** in the future, the 100 copies sold out pretty much straight away, creating a bit of a justified buzz for Vicissitude, which will be released in the summer of 2013.

James Chapman‘s music as Maps feel a lot like being subjected to hypnosis: his voice on ‘I Heard Them Say’ is whispered meditatively like a therapist as you involuntarily recall events and emotions locked well inside, while musically he offers a shifting, amorphous palette of sounds that feels hazy, lush and entrancing by turns. Sounds are layered in dense seams of locked-up feelings to create a sensibility that the kids would probably label chillwave (or hypnogogic pop if you’re one of those academic types over at The Wire). ‘I Heard Them Say’ is brutal, in a very subtle way – by the end, after you’ve been subjected to those enveloping synth tones, drones and pulses and Chapman’s quiet musings, you’re left with an uncomfortable feeling of unease (heightened by detached references to insanity) laced with something vague on the periphery that could be, but probably isn’t, optimism.

The 12″ comes with two mixes, one from Maps and one from Andy Stott. Chapman’s remix is sparse, fragile and dark, ultimately reaching the same emotional place, just more slowly and deploying judicious use of treacly reverb along the way. Man of the (underground) moment Stott’s mix is filled with crunchy percussion and beats between which whole universes reside, the bassline burbling gently to the surface every so often and Chapman’s rearranged voice washing in like a sonic wave. Toward the end the emergence of droning synths offers some respite from relentless slow-motion techno minimalism, becoming the soundtrack to a very dark sci-fi flick instead.

A digital version of ‘I Heard Them Say’ was initially available with album pre-orders via the Maps webstore.

* Sadly, the 12″ singles were not stamped by Chapman himself but by a friend in the Mute office. Talk about an illusion-shatterer…

** My pristine copy is currently available for purchase on Discogs