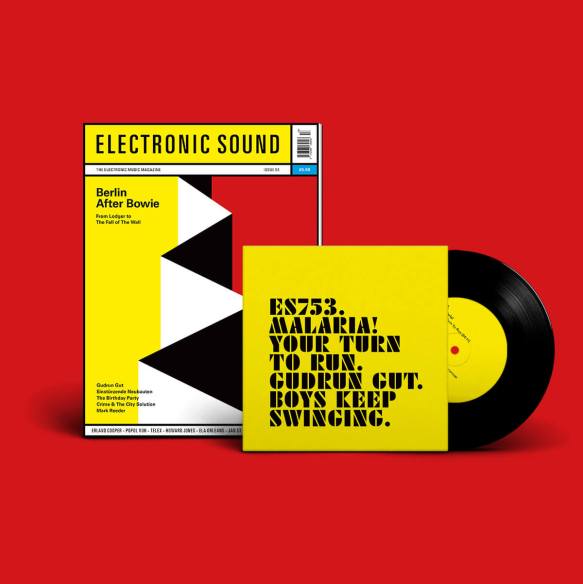 The latest issue of Electronic Sound is now available in the usual high street retailers and as a bundle with an exclusive 7″ from their website. This issue has a primary focus on Berlin, featuring conversations with Alexander Hacke from Einstürzende Neubaten, Mick Harvey, Simon Bonney and others who recall the vibrant creative melting pot that the divided city represented in the late 70s and early 80s. The accompany 7″ features Berlin legends Malaria! while Gudrun Gut from band offers her take on sometime Berlin resident David Bowie’s ‘Boys Keep Swinging’ on the B-side.

My major contribution to issue 53 was a feature on John Cage’s seminal composition 4’33” and the incoming Mute STUMM433 project. For this feature I interviewed K Á R Y Y N, Daniel Miller, Simon Fisher Turner, Irmin Schmidt, Laibach, Pink Grease and Maps, each of whom explained how they approached their performance of Cage’s distinctive piece – where they recorded it, and what instrument they didn’t play. Each of the 58 versions on STUMM433 is wildly different from the next, each one includes its own individual story and accompanying visual, and only one of the inclusions is actually silent – just as Cage would have wanted.

This feature involved me diving back into Cage’s Silence book – something I’d first tackled in my late teens when I found a copy in my local library and studying the score. One took much longer than the other. It also awoke in me an interest in Zen after reading about Cage’s following of these ascetic Buddhist principles. 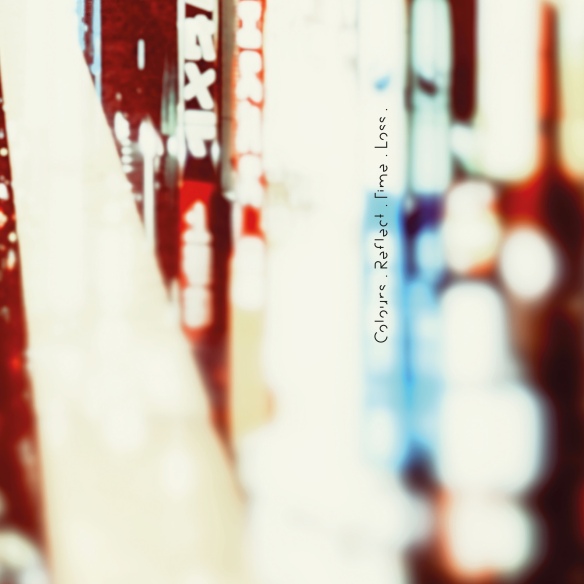 Six years on from James Chapman‘s last solo LP and his 2016 onDeadWaves project with Mute labelmate Polly Scattergood, Maps returns with the brilliant Colours. Reflect. Time. Loss. on May 10th 2019.

Ahead of its release, it was an honour and pleasure to speak to James for Clash about strings, synths and… SodaStream. You can read the interview here.

“Posesses a stripped-back, nascent, haunted bluesy quality, which is both arresting and intriguing by equal measure.” – Clash

I would love to say that identifying my favourite album of 2016 was a trial so painful I almost gave up the whole notion of doing this, but that would be a complete lie. I always knew this one would be it, pretty much from the moment I heard it.

onDeadWaves is a powerful collaboration between Mute stalwarts Polly Scattergood and James ‘Maps’ Chapman. They first performed together at the Short Circuit festival back in 2011 and finally put this album together for release this year. As I noted in my review for Clash, the concept of two singers coming together when their lyrics are usually so uniformly downbeat is, at least on paper, a terrifying prospect. But it’s not like that in reality.

This is an album that is borderline profound, completely moving and inventive at every turn, full of mesmerising fragility and cavernous emotional depth, daubed with an oblique Americana; an album that makes you appreciate music slightly differently after its played with your emotions so effortlessly; a music delivered with an intimacy that feels like eavesdropping on private musings.

My review for Clash can be found here.

The debut album from onDeadWaves – Polly Scattergood and James Chapman / Maps – has been one of the major highlights of this year, a very special record that is definitely more than the sum of its parts – a major compliment since those ‘parts’ represent two very accomplished musicians in their own right, presiding over back catalogues full of towering emotional moments.

For Dusk Sessions #1, onDeadWaves offer up a new version of ‘California’, one of the few truly upbeat songs (albeit one about death) on the album. Here, everything is reduced to a whisper, giving the track an intimate edge that feels like little more than wind rustling through fallen leaves, or a quiet nighttime acoustic beach singalong for depressed Millennials.

The track is backed by an equally fragile cover of Pink Floyd’s ‘Comfortably Numb’, whose ethereality makes the version of ‘California’ seem weighty in comparison. Here the pair give a curious optimistic edge to a song that is essentially about having no emotional or capacity for feeling at all.

Dusk Sessions #1 is available on iTunes.

onDeadWaves is a collaboration between two Mute artists, both of whom have been at the label during the EMI years as well as the new, independent-once-more phase – Polly Scattergood and James ‘Maps’ Chapman. Their debut album, On Dead Waves is that rare example of something that is far, far, far greater than the sum of its parts.

I reviewed the album for Clash and you can read my review here.

On Dead Waves is released on May 20. The duo play a free show in London on June 7. For more information, go to the onDeadWaves Facebook page.

single // I Heard Them Say

‘I Heard Them Say’, the first taster from the third Maps album Vicissitude, was released as an exclusive 100-copy, hand-stamped* 12″ in association with Manchester mail-order outlet Boomkat. Set to become a contributor to the pension plan of a select few record collectors** in the future, the 100 copies sold out pretty much straight away, creating a bit of a justified buzz for Vicissitude, which will be released in the summer of 2013.

James Chapman‘s music as Maps feel a lot like being subjected to hypnosis: his voice on ‘I Heard Them Say’ is whispered meditatively like a therapist as you involuntarily recall events and emotions locked well inside, while musically he offers a shifting, amorphous palette of sounds that feels hazy, lush and entrancing by turns. Sounds are layered in dense seams of locked-up feelings to create a sensibility that the kids would probably label chillwave (or hypnogogic pop if you’re one of those academic types over at The Wire). ‘I Heard Them Say’ is brutal, in a very subtle way – by the end, after you’ve been subjected to those enveloping synth tones, drones and pulses and Chapman’s quiet musings, you’re left with an uncomfortable feeling of unease (heightened by detached references to insanity) laced with something vague on the periphery that could be, but probably isn’t, optimism.

The 12″ comes with two mixes, one from Maps and one from Andy Stott. Chapman’s remix is sparse, fragile and dark, ultimately reaching the same emotional place, just more slowly and deploying judicious use of treacly reverb along the way. Man of the (underground) moment Stott’s mix is filled with crunchy percussion and beats between which whole universes reside, the bassline burbling gently to the surface every so often and Chapman’s rearranged voice washing in like a sonic wave. Toward the end the emergence of droning synths offers some respite from relentless slow-motion techno minimalism, becoming the soundtrack to a very dark sci-fi flick instead.

A digital version of ‘I Heard Them Say’ was initially available with album pre-orders via the Maps webstore.

* Sadly, the 12″ singles were not stamped by Chapman himself but by a friend in the Mute office. Talk about an illusion-shatterer…

** My pristine copy is currently available for purchase on Discogs

‘These songs they seem to write themselves,‘ sings James Chapman on the poignant, bittersweet ‘Glory Verse’, the towering ballad which rounds off the solitary EP from Short Break Operator and which some indie movie director really needs to snag for his next film’s soundtrack. That line, accompanied by a skittering drum pattern, organ chords and genteel guitar serves as a neat summary of how effortless, relaxed and casual the four songs on the EP feel, a distinct accomplishment for a debut release from an artist better known as Maps. The EP was released on Radiate, a subsidiary of Virgin / EMI and predates Chapman’s own Lost Space imprint, through which the first Maps singles were issued.

Chapman himself calls these ‘lo-fi’ recordings, and in contrast to the fuller, more electronic production on the Maps releases, that isn’t a totally inappropriate way of describing them. What’s more evident is a restrained, almost folksy leaning, the four songs here generally consisting of plucked guitar, subtle electronics and percussion, with vocal harmonies that evoke a pastoral sense of longing and muted euphoria. It’s the kind of chilled-out, warm music you’d expect to hear in a tent on the fringes of a festival, a guy with a guitar sat hunched over a mic at the edge of a small stage accompanied by a miniscule box of tricks.

The songs here feel like raw outpourings of uncertain emotions, the harmonies and chords suggesting something uplifting while the lyrics hint at some monumental misery, interlaced with wintery imagery and plaintive pleadings. ‘This Transmission’, with its delicate string section and lyrics suggesting unrequited love captures that delicate balancing act perfectly, while ‘Some Winter Song’ has a beguiling, wide-eyed theme with circular lyrics referring to positive feelings, the source of which Chapman – somewhere between gleefully and spitefully – doesn’t divulge to whoever the song is being delivered to. Synths shimmer like reflections on ice, giving these songs a glacial, frozen beauty.

‘Take Route / Point Odinsve’ is probably the most overtly ‘electronic’ piece here, a sparsely populated soundscape undercut by a steady pulse and melodies from guitars, synths and strings that weave and glide like a light aircraft on the thermals above the Reykjavik ice-world alluded to in the second part of the song’s title. If Biosphere’s Geir Jenssen tried to cover Dave Angel’s In-Flight Entertainment EP with an orchestra, it might sound something like this. A processed ‘peaceful‘ uttered deep in the middle of the trip feels tranquil and still, comfortably isolated.

Chapman adopted the moniker Short Break Operator during a period of wanting to escape more or less everything, finding himself gazingly longingly at holiday brochures for short-haul destinations like Iceland but thwarted by prohibitive costs. One of those brochures claimed itself to be from ‘Your No. 1 Short Break Operator’, giving rise to the alias used on this EP, while the name Maps too fits with a sense of travelling. Chapman finally got to work in Rejyavik on the We Can Create album after signing to Mute.