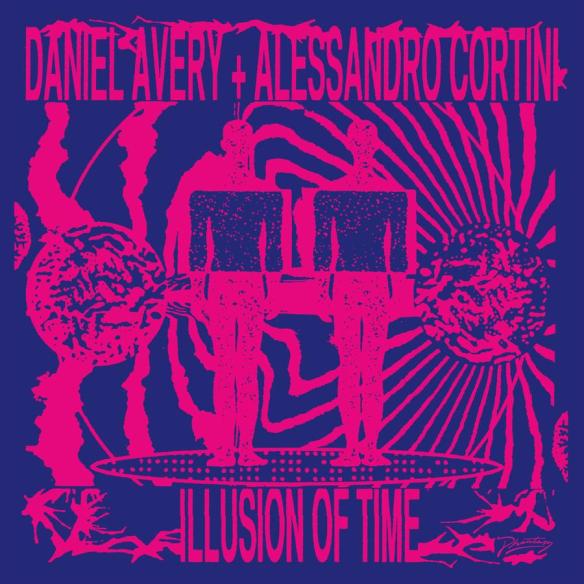 With ‘Sun’, you could discern Cortini’s trademark, bold synth strokes edged with a dirty, fuzzy industrial quality. Haunting vocal textures and submerged melodies created a brooding, dark ambience, like an alternative soundtrack to Terminator and every bit as dystopian. ‘Water’ was the inverse, offering a richness and depth of colour, an elastic sound occupying the foreground carrying an unpredictability while the background stayed resolutely focussed on clusters of pads and spiralling tones. The effect was not dissimilar to some of Robert Fripp’s experiments with triggered sounds and textures, poised somewhere between a meditative, reflective mood and a restless hopefulness.

Illusion Of Time was completed in 2018, and cements the vision that ‘Sun’ and ‘Water’ hinted at. Like many electronic projects, Illusion Of Time began as a distance collaboration, the pair shaping and sculpting tracks over the digital aether before finalising the pieces together while touring with Nine Inch Nails.

The album’s title track opens with delicate, mesmerising synth cycles overlaid on top of resonant blocks of sound and white noise panned across the stereo field. The track has a poignancy and sweetness, a sense of optimism in troubled times, whether illusory or not. That approach runs throughout the record, sometimes with a glimmer of uncertainty; ‘At First Sight’ is probably the best example of this, delivering gentle melodies sounding not unlike uilleann pipes drifting across a turbulent, pulsing, bass-heavy sequence of tones.

Elsewhere, we come across moments of intense beauty. ‘CC Pad’ contains sparse, haunting, overlapping pads, creating an effect like gazing across a beatific, frosty Spring morning landscape. In the background you hear a feint clicking sound, creating a suggestion of rhythm or the scratchy rotations of an ancient gramophone. Two brief interludes in ‘Space Channel’ and ‘Interrupted By the Cloud Of Light’ have an evocative, ethereal quality, nodding to an ambient tradition but laced with crackling white noise sounding like the release of intense radiation from a distant star.

Among all of these poignant, brilliant vignettes is the standout ‘Inside The Ruins’, advancing forward on growling synth sounds moving from ear to ear, wrapped in cavernous echo and a sense of imminent, unresolved threat. On this piece it’s hard not to imagine the environment suggested by its title. In my mind I see myself standing in a destroyed ancient temple in Syria while drones buzz and criss-cross overheard, emotionlessly surveying the devastation.

Illusion Of Time by Daniel Avery and Alessandro Cortini is released March 27 2020 by Phantasy Sound. Thanks to Ellie, Naomi and AC.

“I was moving around Berlin a lot when I was listening to works in progress for this album. I realised that I was maxing out on the volume, and after briefly thinking about the damage that I might be causing to my ears, I also realised that I’ve never really found myself making stuff that loud before. I remember doing that as a kid – I’d push the cheap, crappy headphones against my ears to get more bass while I was listening to the version of Duran Duran’s ‘Save A Prayer’ from ‘Arena’ which I used to play over and over.”

VOLUME MASSIMO, the new album from Alessandro Cortini and his first for Mute, is released tomorrow.

Ahead of its release, I spoke to Alessandro for Clash about his love of vintage synths, pressing headphones against your ears to get more bass and the enduring influence of guitarist Steve Vai.