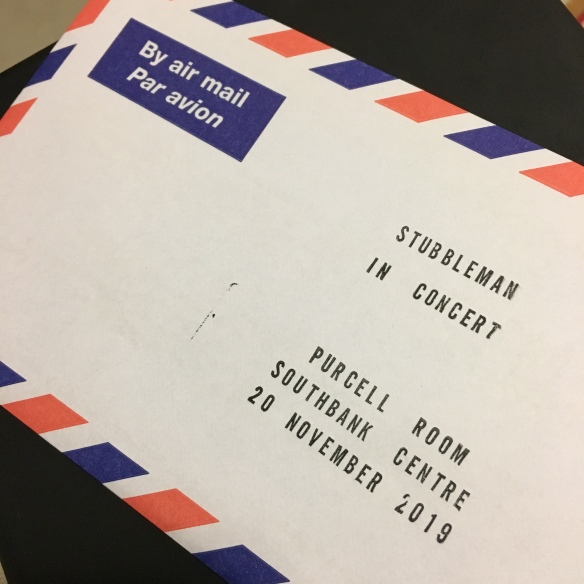 “Was that what you were expecting?” asked a confused lady sat next to me as Simon Fisher Turner and Laura Moody concluded their opening set of electronics and expressive cello playing.

Being well-versed in Fisher Turner’s varied musical output I replied that it was exactly what I was expecting, at least in terms of approach; that said, even I was a little scared out of my wits as loud splinters of noise unexpectedly peppered a suite of sounds encompassing overheard recordings of what could have been people milling about in the bar before the show, the sound of plates being spun around on a tabletop, wonky rhythms created from breathy stutters and all sorts of intriguing, richly textured sonic events.

Alongside this, Laura Moody took a whole-instrument approach to her cello playing, striking the strings with the flat of her bow to create springy, bassy reverberations, tapping the back to develop rhythms, furiously sawing away to develop dissonant, upper-register squeals, or playing the bridge instead of the strings. Occasionally Fisher Turner would play sections of strings, and with that as a cue, Moody would then settle into what one might describe as a more traditional sort of playing, her cello cresting above the recorded strings without ever sounding too mournful or melancholy.

The pieces were taken from Fisher Turner’s forthcoming album with the ceramicist and author Edmund de Waal, with whom he recorded his version of John Cage’s 4’33” for Mute’s STUMM433 boxset. ‘Is this jazz?’ asked the lady next to me, largely unmoved by my explanation of what she’d just observed and my enthusiastic summary of Fisher Turner’s career in everything from pop to soundtracks to sound art.

I could (half) see her point. Fisher Turner and Moody’s set was not jazz, and neither was the artist they were supporting – Pascal Gabriel, in his Stubbleman guise – but they could be forgiven for asking the question. Gabriel’s performance formed part of the EFG London Jazz Festival, and even if you took a most liberal definition of what jazz is, the music he performed – a 55-minute seamless journey through his entire Mountains And Plains album and an extract from a new work inspired by his fastest time cycling Mont Ventoux in Provence – wasn’t jazz. But hey, genres are just labels anyway.

Gabriel faced a challenge with realising the many-layered sounds presented on Mountains And Plains for a live show without resorting to an unadulterated laptop playback non-performance. Instead, he painstakingly crafted a series of electrically-controlled automata housed in old-fashioned travel trunks that could be triggered to perform melodies alongside his and his Rotem Haguel’s playing. Watching a drum kit play itself on a piece like ‘South 61 West 14’ was a strange delight to behold, the kind of stuff of dreams or episodes of Bagpuss. One imagines that Luigi Russolo and his merry band of Futurists would have approved.

Watching the machines, which occupied centre stage with Haguel and Gabriel flanking them, was nothing short of mesmerising, reminiscent of Victorian player-pianos and fairground organs yet positioned within an ultra-modern context. Hearing the machines play the haunting, filigree passages of ‘Piety Wharf’ or ‘Abiquiú’, accompanied by visuals of the environments that Gabriel and his wife Pippa observed on their road trip across America was moving in a plaintive, unexpected way.

Gabriel concluded his performance with a twenty-minute concluding extract from his second Stubbleman release, titled 1:46:43. The suite is named after his best time on Mont Ventoux, and its inputs were the various metrics his bike’s onboard computer recorded throughout the best part of two hours of hard peddling – heart rate, cadence and so on – which Gabriel then turned into electronic sequences.

The extract was given extra poignancy by Gabriel’s explanation that his composition was also informed by the abortive climb of Mont Ventoux by British cyclist Tom Simpson, who died a short distance from the peak during the 1967 Tour de France. The music taken from 1:46:43 could immediately be linked to the stylistic poise of Mountains And Plains while taking on a hypnotic, meditative edge and restless drama that nodded firmly in the direction of Philip Glass and Terry Riley.

Ahead of the show, SFT has remixed ‘Abiquiú’ from Mountains And Plains.

Watch the rehearsal video below.

Read my interview with Pascal Gabriel here. Read the review of Mountains And Plains here.