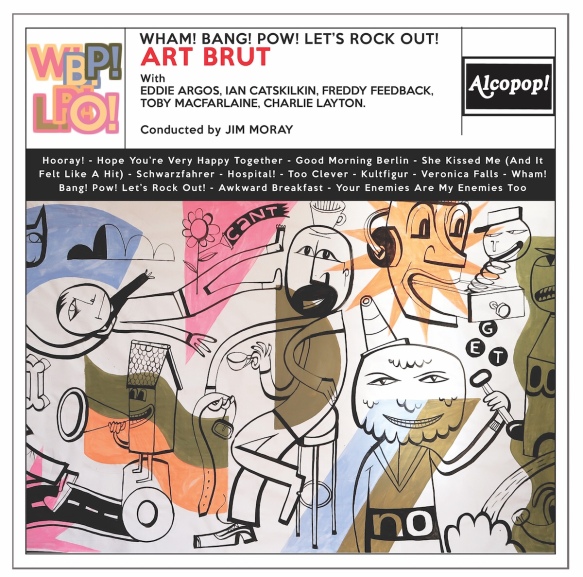 “We’ve got a lead singer. Doesn’t really sing. Lives off his paintings. Got a flat in Berlin.”
– Art Brut, ‘Kultfigur’

Some seven years on from their last LP, much has changed for Art Brut. Two members from the original line-up, Jasper Future and Mike Breyer, have left, while enigmatic frontman Eddie Argos has various taken on the mantle of playwright, comic book writer, death’s door hospital patient, father and painter-for-hire.

Some seven years on from their last LP, much has stayed the same for Art Brut. Honestly, it’s like they never really went away. New drummer Charlie Layton, lately from The Wedding Present, and new guitarist Toby MacFarlaine have slotted so neatly into the Art Brut fold alongside original members Freddy Feedback (bass), Ian Catskilkin (guitar) and Argos that it’s like they always belonged here. The album was faithfully produced with Jim Moray, who also worked with Argos on his musical The Islanders, which was performed at Edinburgh’s Fringe in 2013.

Wham! Bang! Pop! Let’s Rock Out! is everything you want from an Art Brut record – the spiky, punk-informed, joyful guitar pop, the erudite non-sequitur-laden spoken observations of Eddie Argos, cheekily assimilated reference points (Lionel Richie, Phil Spector) and an ethos that’s simultaneously meticulously polished and chaotic by equal terms. In all of those many essential ways, the LP picks up precisely where Brilliant! Tragic! left off and that is a truly fantastic thing; sometimes you don’t realise you’ve missed something until it comes back, and that’s part of what this album charmingly represents, a continuation of something that should never have ever been allowed to fizzle out.

And yet, it also finds Art Brut somewhat changed. This is inevitable. We’re all seven years older, seven years wiser (whatever that is), seven years more experienced and probably seven years poorer. A lot can happen in seven years, and the turbulent upheaval of Argos’s personal life is unavoidably present in these songs. The album seems to pivot on the epic ‘Good Morning Berlin’. Here you find a Blur-ry swagger with antediluvian whistling and jangly ‘Country House’ guitar; it all sounds perfectly cheerful until there’s a slightly melancholy, wistful chord change on the bridge that coalesces into a concluding passage laden with regret, mournfulness and a sense of abject disbelief at the state that Argos finds himself in.

That sharp change in direction seems to reveal the catharsis at work on this album. The songs might sound as full of unbridled joy as they ever did, but here you find Argos working through everything from separation, coming to terms with sobriety, staring at hospital ceilings, watching someone you’ve spent intimate moments together shack up with someone else, and that heart-racing, sweaty-palmed excitement of falling in love all over again after years of comfortable coupledom. Yes, the delivery is unchanged, the wry humour is undiminished, but the content is infinitely more personal.

How you approach Wham! Bang! Pow! Let’s Rock Out! depends on whether you want to spend too long thinking through the sentiment of Argos’s words; if you don’t, tracks like ‘Hooray’ or ‘She Kissed Me (And It Felt Like A Hit)’ or ‘Hospital’ just sound like fantastically refreshing power-pop tracks, replete with overamped guitars, glam handclaps, occasional Theremin-like synths, horns and dizzying levels of unstoppable energy. Spend a bit of time in their company and what you find is a band that’s quietly, subtly matured, but still capable of rocking out as if time stood still.

“There’s a fire in my soul / I can’t put it out.” shouts Argos on the album’s irrepressible title track, and that says it all.