I’m continuing my trawl through the Snow Globe cocktail box that came with last year’s boxset and this past weekend I turned my hand to this one, named crudely after the ABBA track that rounded off Vince Clarke and Andy Bell‘s only UK number one single, 1992’s ABBA-Esque EP.

The Woo-Woo is a terribly named drink – definitely one for the alcopop generation, I would say – but it is elegant in its simplicity, both in ingredients and the fact that any amateur mixologist could manage to make this without messing it up. A mix of vodka, peach schnapps and cranberry juice generally served as a highball, the peach counteracts the tartness of the cranberry juice and the sweetness of the peach is neatly offset by the cranberry. So if you can look past the abysmal triteness of the name, this is a pleasant long drink that could probably lead to many blurry nights. 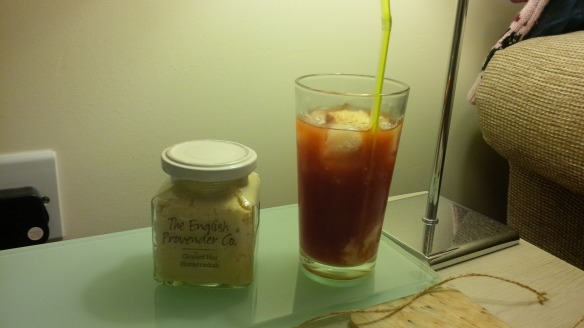 Harry MacElhone’s ABC Of Mixing Cocktails is widely acknowledged as the go-to book for authentic mixology. Harry MacElhone was the owner of Harry’s New York Bar in Paris – a firm favourite with the Hemingway crowd – and either personally created or offered some of the earliest cocktails, many of which have become enduring classics.

The Bloody Mary is such a drink. Although at least three people have laid claim to inventing the drink, the story that’s most credible is that the Bloody Mary as we know it today was created by Fernand ‘Pete’ Petiot, a bartender at Harry’s New York Bar in Paris in 1921. A man named George Jessell is one of the bartenders who claimed to have mixed vodka with tomato juice for the first time, but it’s Petiot that first mixed it with lemon juice, Tabasco sauce and salt (tomato juice in the Twenties was sold without salt having been added, unlike today) to give us the basis of the drink that’s become a staple hangover cure today. (There are some decent arguments for why the antioxidants in the ingredients make this the best hair of the dog out there, but sadly received scientific wisdom would argue that nothing’s better than water to overcome the night before’s shenanigans.)

Petiot claims he first prepared the drink for two Chicagoans who had visited Harry’s Bar, and the name stemmed from them wistfully recalling a bar back home called The Bucket Of Blood and a specific waitress called Mary who worked there. Others have claimed it was named after Queen Mary. We’ll never know for sure, but we can be assured that the addition of spice – principally to please the American palate – was every bit as inspired a move as mixing tomato juice and vodka in the first place.

Although variations of Bloody Marys are now ten a penny, Petiot’s original recipe which is included in MacElhone’s ABC Of Mixing Cocktails is firm on one divisive ingredient: ‘above all no celery salt’. Thus he would turn in his grave at the Blood On The Snow – named after a track from Snow Globe – which not only includes the offending inclusion but also horseradish sauce.

Unfaithful to a proper Petiot Mary it might be, but this is a drink that deals well with extra spices, and so adding that alongside Tabasco and worcestershire sauce still makes for a great drink, even if drinking lumpy horseradish sauce takes a bit of getting used to. I’m with Petiot and MacElhone on this one though – you can keep your celery salt. And if you find the idea of drinking vodka with brunch the next day a little hard to justify (poor, poor you), ditch that and prepare it as a virgin version – you won’t notice its omission through the spice.

So, following up my post last week about the Blue Savannah cocktail from the Snow Globe boxset booklet of recipes, I decided that the next one on the list would be the A Little Raspberry-spect. Clearly, this is somewhat clumsily named after what I recently described as Vince Clarke and Andy Bell‘s signature song, ‘A Little Respect’, and just like that single, this one has hit written all over it.

This is a mix of gin, lemon juice and muddled raspberries, the tartness of which is offset by sugar syrup (I used agave syrup, which has a lower GI, whatever that means, and where the taste is a bit less in your face). The recipe in the Snow Globe book specifically calls for Beefeater gin, but I wasn’t going to go and buy some just for this, and instead used the dregs of some Tanqueray that have been skulking in the back of the drinks cabinet since Christmas. (The second time around we used vodka and that worked just as well.)

This drink is refreshing, sweet / sour, brilliantly seasonal and provides a neat use for raspberries that have gone a bit squidgy and which would otherwise be destined for a smoothie if you can be bothered, or the bin if you can’t. It also looks pretty darned chic as well, and might well replace the relative heaviness of Pimm’s round our way when summer really gets going. 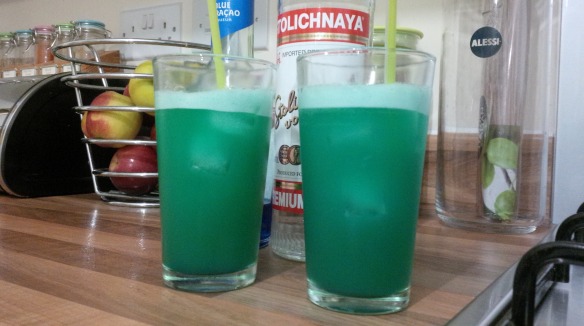 To celebrate the announcement of the new Erasure album yesterday, I thought it was probably high time to take a proper look inside the box of their last album, 2013’s Snow Globe. Specifically, I thought I’d raise a glass to The Violet Flame by mixing one of the Erasure song-themed drinks included in the novelty cocktail booklet that came inside the Snow Globe box.

Alongside my love of all things Mute, another of my interests is making cocktails. I don’t say that as code for enjoying getting drunk – far from it; I’m not good at that at all – but rather I genuinely enjoy the process of taking ingredients, following recipes and mixing interesting drinks.

I selected the Blue Savannah, named in honour of the third single taken from Wild!, for two reasonably sensible reasons; first because I happened to have all of the ingredients in the house already, and second because Mrs S tends to prefer longer, juice-based cocktails.

The Blue Savannah is a vodka-based drink mixed with blue curacao, orange and pineapple juices which is then strained into a highball glass over ice. Anyone with a rudimentary grasp of colours will know that mixing blue with orange will produce a greeny, almost turquoise hue, and so it is with the Blue Savannah, as can be seen in the photo. Pineapple juice, when shaken and strained, produces a velvet foam (as does egg white), hence the ‘head’ that’s visible on the drink.

Curacao is a liqueur made with a bitter, orange-esque fruit called lahara. When mixed with sweet juices as it is in this drink, curacao has the effect of cutting through sweeter flavours and toning down fruit sugars. Plus, in the case of blue curacao, it naturally adds a distinctive colour to proceedings. Not being a fan of really sweet cocktails, I really liked the addition of some bitterness. Mrs S was less convinced, saying that something in the drink was bothering her throat.

I will ultimately work my way through the other cocktails in the book over the next few months. I’ll even tackle the Love To Hate You, a challenging drink that includes Marmite alongside fruit flavours.