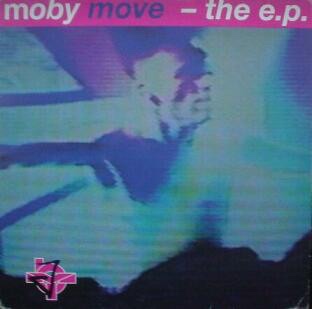 ‘Move’ was Moby‘s first single for Mute, and I still think that it could be argued as the best dance track – aside from ‘Go’, of course. 1993 was a time when Richard Hall’s focus was entirely on housey, uplifting dance music, without any of the guitars and hip|hop beats that pervaded his subsequent work on albums like Play.

‘Move (You Make Me Feel So Good)’ was designated as the single mix, and is everything you’d want from a Moby dance track – solid beats (with a bit of a hardcore break feel), atmospheric / euphoric strings, melodic piano and soulful vocals. ‘All That I Need Is To Be Loved’ was re-recorded as a thrash metal dirge for ‘Hymn’ and his debut Mute album Everything Is Wrong, but on the 12″ we get the seminal original, while the CD includes an edited mix. It’s an aggressive but trancey acid cut, with a central synth hook and heavy 4/4 beats, an impassioned Moby largely shouting the lyrics.

‘Unloved Symphony’ is proper ‘ardcore – frantic beats, headcleaner noises etc, but Moby tempers this aggression with piano motifs and some queasily moving string sounds. ‘The Rain Falls And The Sky Shudders’ points to his soundtrack work – beautiful piano heard in the middle distance, while the sound of a torrential downpour provides the foreground. Various noises filter through, and overall this is a seminal treat tucked away on this single. Over on the 12″, ‘Morning Dove’ is a repetitive percussive tribal house cut with a riff like a Moroccan snake charmer, and apparently named after a particularly potent ecstacy tablet.

The second 12″ includes four remixes – three by Moby himself including a full-length version of the single mix and one by Mark ‘MK’ Kinchin. MK’s mix is pure ’90s house, his layering of the scant vocals and new sax riffs over a steady house beat echoing his work with Nightcrawlers. Moby’s two mixes on the B-side are aggressive and fast (Sub) and deep and relaxed (Xtra), the lattering featuring what sounds like a double bass. A further mix by Moby, his Disco Threat mix, is exclusively available on the cassette and two-track CD single.

The first album from Moby‘s Voodoo Child alias comes with a title that, like other things released by Richard Melville Hall around this time, is hardly filled with optimism. His first Moby album for Mute was titled Everything Is Wrong, he released a single under the alias Lopez around this time with the title ‘Why Can’t It Stop?’ and Animal Rights, whilst not necessarily negatively-titled, was filled with a real sense of bitterness, anger, disbelief and unbridled rage. I may very possibly have dreamed this, but I seem to remember reading that around this time Moby split up with his long-term girlfriend and so who knows whether these titles reflect a slightly embittered state of mind – lots of the titles on this album are suffixed by the word ‘love’, so it could be true. Equally, we know Moby is a huge fan of Joy Division, a band that made being miserable a career option.

In any case, for all the pessimism of that title, the sleeve images – aside from the gust of wind blowing at the palm tree on the front cover – are actually pretty tranquil. True, there’s no-one in the pictures, and sure, the unpredictability of the ocean can inspire fear in lots of people, but it looks like a nice enough beach. The sense of peacefulness I take from the images are a decent enough clue to the music on The End Of Everything. It doesn’t look like the worst sort of end to me.

Moby has done ambient before – a whole album of the stuff back in the Instinct days, the remix of ‘Hymn’, the bonus Underwater album that accompanied Everything Is Wrong, soundtrack stuff and plenty of other things since – but he’s never done anything like The End Of Everything. This is fragile, emotive electronica dominated by crisp beats, noodling layers of liquid synth modulation and those trademark string lines that really started to sound like a proper orchestra here rather than the occasionally bad looping evident on other Moby records.

‘Patient Love’ is what happens when the intro to Kraftwerk‘s ‘Neon Lights’ doesn’t suddenly open out into a shimmering cinematic pop soirée; instead this is gentle, lilting synth pop with all the analogue wobbliness an electronic music fan could ever need in their lives, and a patient, slowly-developing progress that seems several worlds away from the freneticism of earlier Voodoo Child tracks. It’s also rather jolly, in a wonky sort of way, though a sequence of unexpected chord changes around the halfway mark muck around with your senses cruelly. ‘Great Lake’ is ‘Go’ all over again, just with chiming synth notes and jazzy piano sprinkles struggling to know where they’re supposed to be heading, and that classic Moby moment deconstructed into the territory of textured nuance.

Elsewhere it’s all serene washes of colour, those heart-wrenching strings, gentle phasing, meditative bass lines, clusters of devastatingly accomplished piano sprinkles and beats that chug along wearily like they’ve been burned out from too many nights of intensive partying. Yes, there are moments of darkness that befit the mood evoked in the title of the album (‘Slow Motion Suicide’, somewhat predictably, is pretty bleak), but generally this is a slick, absorbing collection of listening electronica with enough quiet flair and looseness to separate it comfortably from the bland direction that some ambient music opted to take.

All taken together, The End Of Everything feels a lot like watching a big screen blockbuster on a mobile phone – it somehow seems far too bold and expansive a body of work to have been delivered as a low-key side project; it needs, almost demands, a larger presence than it rather anonymously has. Consequently, it stands as one of the most discreetly accomplished, enduring and satisfying releases in the entire Moby back catalogue. The End Of Everything was released on Moby’s Trophy Records sub-label of Mute and the US version of the album featured a different tracklist. In a typical Moby act of self-depreciation, the catalogue number for the Trophy release was idiot1. The inside of the sleeve includes a brief and heartfelt mini-essay from Moby on animal welfare.