“The lights of the pub are shining. Though we can’t be there to hear, in spirit we’ll all be singing, Merry Christmas and Happy New Year.”

– ‘The Lights Of The Pub’ by Dave The Keys

In normal times, if you were to head down to The Lamb on London’s Holloway Road on a Thursday evening, you’d be sure to find a certain Dave The Keys tinkling the ivories and playing popular songs at the piano. Said Dave is Mute stalwart David Baker, one half of I Start Counting, Fortran 5 and Komputer, whose prowess with the pub’s upright piano might come as a surprise given how every iteration of his pairing with Simon Leonard has been almost exclusively centred on electronic music.

Well, these aren’t normal times, and The Lamb, like so many pubs across the country, is on its knees thanks to two lockdowns and financially punitive – though necessary – restrictions. In response, Baker has recorded ‘The Lights Of The Pub’, a beautifully evocative song where all sales go toward The Lamb’s crowdfunding campaign to avoid its metaphorical last orders.

‘The Lights Of The Pub’ is the singalong around the Joanna that never was, carrying a gentle sway like the last song before closing time. The song is led by Baker’s piano, around which a softly fluctuating synth meanders, joining up with festive bells and a beat as crisp as a frosty winter morn. Here you will find a wistful nostalgia for more carefree times, deeply rooted in a sense of a London community that could permanently lose the centre of its community. Poetic reflections of Baker’s North London locale abound here; an ambulance screams down the Holloway Road; a desperate man sits outsides the Tube station; he sings of an empty train, an ironic inversion of the movement of people across the capital that he sang about in Komputer’s ‘Looking Down On London’.

“I’d been wanting to do a Christmas song for years, but never got round to it,” Baker explains. “I had an idea of doing a London version of ‘Fairytale Of New York’. It started off as ‘The Lights Of The Thames’ but it evolved into ‘The Lights Of The Pub’ when I connected it to the plight of The Lamb and many other pubs around the country. The Lamb is a lovely pub on Holloway Road in North London where I’ve been playing piano for singalongs on Thursdays for a few years now. Unfortunately, it is closed due to the current regulations so they launched a Crowdfunder which I thought I’d try and help out with.”

Support The Lamb’s Crowdfunder here. Buy ‘The Lights Of The Pub’ at Bandcamp.

The Lights Of The Pub by Dave The Keys was released December 4 2020.

The duo performed a rare live date on Saturday 30 November at Electrowerkz in London as part of TEC006, curated by our friends at The Electricity Club and Cold War Night Life. Their set covered some choice, classic moments from across their entire back catalogue.

The duo will perform a rare live date on Saturday 30 November at Electrowerkz in London as part of TEC006, curated by our friends at The Electricity Club and Cold War Night Life. Ahead of their return to the stage, we are reposting a 2011 Documentary Evidence interview with David Baker that’s been offline for years, and which was originally published to coincide with the release of their compilation album, Konnecting.

Simon Leonard and David Baker have been associated with Daniel Miller and Mute Records since 1984, releasing their first two albums – My Translucent Hands and Fused – on the label under the name I Start Counting. They would then move in a more dancefloor-oriented direction for their next project, Fortran 5, before, as Komputer, releasing some of the most spine-tinglingly original retro electronica. Selections from the duo’s various Mute releases have been compiled on Konnecting, released as part of Mute’s new An Introduction To series. This interview was conducted by email with Baker, but all answers were received in the third person.

The duo met at Middlesex University when Leonard overheard Baker singing one of his own songs, ‘Playboy Girl’. ‘This led to chats about pop music,’ recalls Baker, ‘and soon the two were DJing at the college disco and doing the pogo occasionally.’ On one occasion, a particular selection, ‘Incendiary Device’ by Johnny Moped, earned Leonard a bottle of Newcastle Brown ale in the mouth and several broken teeth. I’m not personally aware of any similar incidents on their own future tours, but I guess there’s still time.

‘The name I Start Counting came from a book by Audrey Erskine Lindop,’ writes Baker. Lindop’s novel would be turned into the 1969 film of the same name which starred a sixteen year old Jenny Agutter. Agutter’s portrayal of a fourteen year old with sexual fantasies toward her far older stepbrother earned the film a moderate level of controversy. ‘It also relates to the punk habit of introducing songs with “1, 2, 3,4”,’ Baker continues.

Despite their friendship, Baker and Leonard didn’t form I Start Counting until the demise of Leonard’s earlier music project, File Under Pop, who released a solitary single (‘Heathrow’) on the Rough Trade label in 1979. ‘Daniel Miller had his address on the sleeve of The Normal’s ‘Warm Leatherette’ single,’ Baker remembers. ‘File Under Pop contacted Daniel and met up with him in a pub in Hampstead. Simon and he became friends and Daniel recorded some songs with them which never saw the light of day. One was called ‘Connect Until Connected’. Another was ‘Small Hut’.’

The dissolution of File Under Pop led to Leonard and Baker working together and recording demos which they passed to Miller; I Start Counting signed to Mute in 1984, going on to produce a small but significant body of work starting with the subdued joy of ‘Letters To A Friend’ and concluding with 1989’s ‘Million Headed Monster’.

As they began to record demos for what may have become the third I Start Counting album, a growing dancefloor influence led to forming Fortran 5. Fortran was even then a defunct programming language, now more or less as lost as vestigial regional English dialects. Over their first two exceptionally diverse albums, 1991’s Blues and 1993’s Bad Head Park, Fortran 5 found themselves collaborating with all manner of unexpected contributors to produce quirky club-friendly fodder. ‘Rod Slater was one of our collaborators on Bad Head Park,’ Baker tells me when I ask him about Fortran 5’s ‘fun’ dimension. ‘He was originally a member of the Bonzo Dog Doo Dah Band. He’s related to a friend of David’s.’

‘We did some work with Neil Arthur on his solo material, and he did some vocals for us in return,’ explains Baker of Arthur’s contribution to the standout ‘Persian Blues’ from Bad Head Park. ‘Thrash and Colin Faver were introduced to us through Mute. We wanted Derek Nimmo to do vocals on the Derek And The Dominos song ‘Layla’ [on Bad Head Park] as the follow up to Sid (James) singing Syd (Barrett) on our first LP, Blues, and he kindly obliged. Miranda Sex Garden were going to be our stage dancers but when the tour fell through we found out that they could also sing.’

I ask Baker about the leftfield move into electronica’s nether regions with Fortran 5’s third album, 1995’s Avocado Suite. ‘We were given permission to be as experimental as we liked, so we were,’ is Baker’s simple response. When I ask about the dreadful bathroom suite the pair are seen relaxing in, he tells me that it was Leonard’s bathroom in Muswell Hill. ‘It’s now in the London Bathroom Museum,’ he quips.

Reacting against the musical Emperor’s New Clothes that was Britpop and its still blander entrails, Leonard and Baker went back in time to electronic music’s pivotal point, namely a certain ground-breaking band from Düsseldorf for Komputer. ‘We got as close as we could to doing Kraftwerk cover versions on The World Of Tomorrow,’ says Baker, referring to the first of Komputer’s three albums, release by Mute in 1997. I wax lyrical about ‘Looking Down On London’, its almost folksy wistfulness for the city balanced out by the more icy, clinical electronic backdrop. When asked about the origins of that track, the response is typically understated. ‘We both lived on hills in London,’ says Baker. It makes complete sense when you think about it.

The World Of Tomorrow was followed by 2002’s Market Led and 2007’s Synthetik, before the duo mostly disappeared from view, returning with a celebrated live set at Mute’s Short Circuit festival in May 2011. Selections of their extensive tenure with the label were presented together in the August of that year as Konnecting, one of a brief series of artist compilations that saw the newly-independent Mute licensing tracks back from EMI.

I ask Baker what’s next for the duo following the release of Konnecting. ‘We have a live set ready to go,’ Baker tells me. ‘If someone will give us a gig,’ he adds. The prospect of a career-spanning series of concerts similar to their set at Short Circuit is an exciting prospect to say the least, so if there are any promoters reading this please, please, please make this happen. 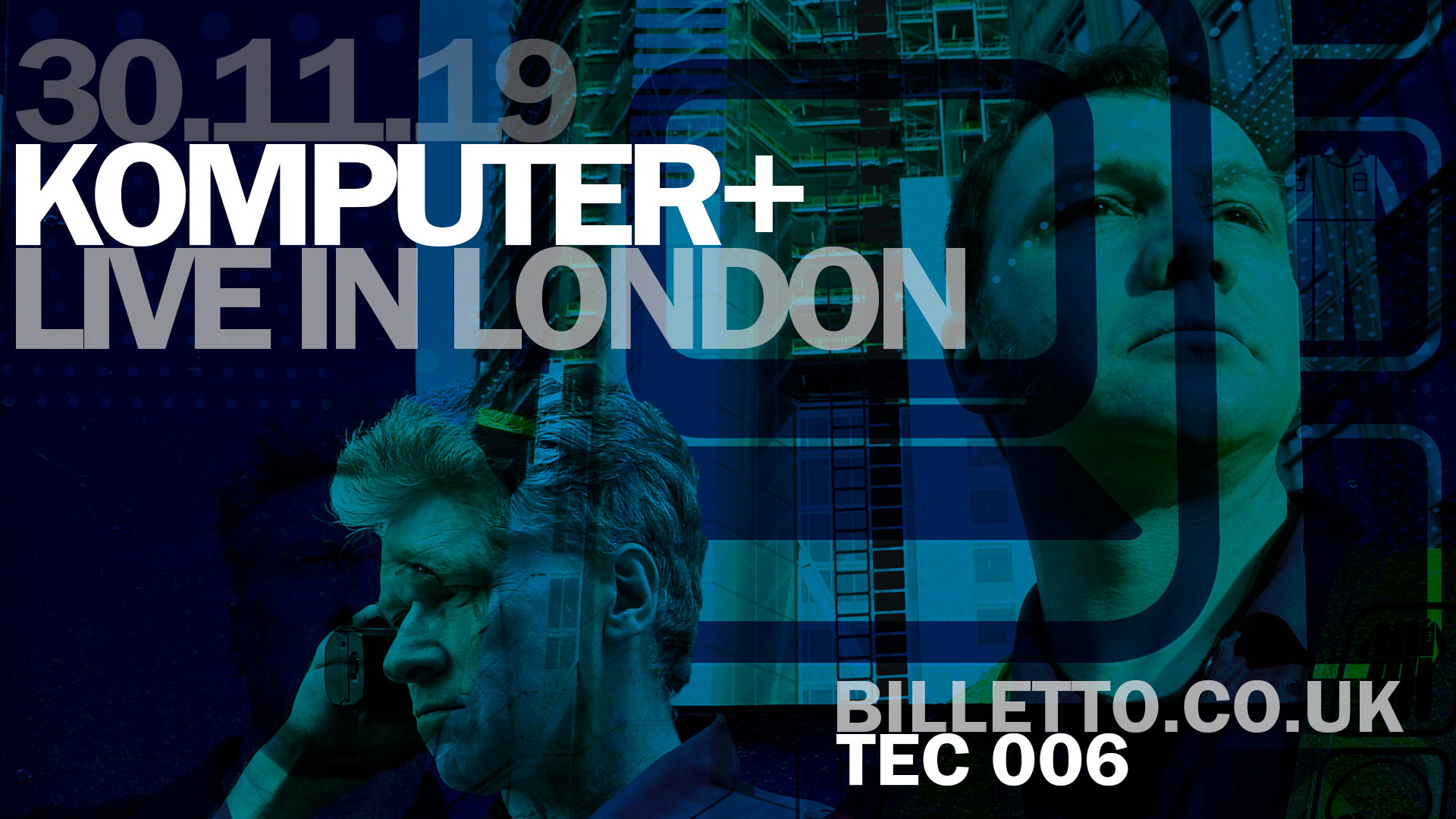 Tickets for TEC006 can be purchased here.

AK-47 was the work of Simon Leonard; ‘Stop! Dance!’ was released a year before Leonard met David Baker, his future musical accomplice in I Start Counting, Fortran 5 and Komputer, at Middlesex University, and two years after his solitary 7″ with File Under Pop on Rough Trade.

Unlike the industrial noise claustrophobia of FUP’s ‘Heathrow’, ‘Stop! Dance!’ is a bouncy little synthpop track which is very 1981 (in a good way), albeit with a dark edge thanks to the vocodered vocals which seem to be lots of references to AK-47, which, in case a whole generation of computer games and action movies has passed you by, is a gun. Naming your musical alias after a weapon and then delivering fey pop music is just about as contradictory as anything else Leonard has done in his musical career I guess. ‘Stop! Dance!’ is all simple, persistent drum patterns, stalking single-key basslines and bubbling sounds and sweeps blended in over the top, while a chord change brings in a brief, wobbly and quite pleasant melody.

‘Autobiography’, the first of two tracks on the B-side, is a short instrumental featuring a sawing synth sound, tick-tock beat, some Kraftwerk-esque vocal loops, reedy melodies and Leonard intoning a brief couplet about waking up and getting on a freight train, as if the autobiographical element was some deep southern porch blues number. ‘Hilversum AO’, another instrumental, has a euphoric quality, even if there are a few dud notes in among its elegiac melodies.

There’s nothing exceptionally polished about these three tracks, unlike the comparatively gleaming work Daniel Miller and Depeche Mode would put out the same year on Speak & Spell; like ‘Heathrow’ it retains a firmly experimental dimension, only here that edge is delivered through synths rather than grainy field recordings. Quite aside from its collector status among I Start Counting / Fortran 5 / Komputer fans, this is an example of an alternative electropop and bagging a copy on 7″ would have set you back near enough GBP50.00 at the time this was first uploaded.