The duo performed a rare live date on Saturday 30 November at Electrowerkz in London as part of TEC006, curated by our friends at The Electricity Club and Cold War Night Life. Their set covered some choice, classic moments from across their entire back catalogue. 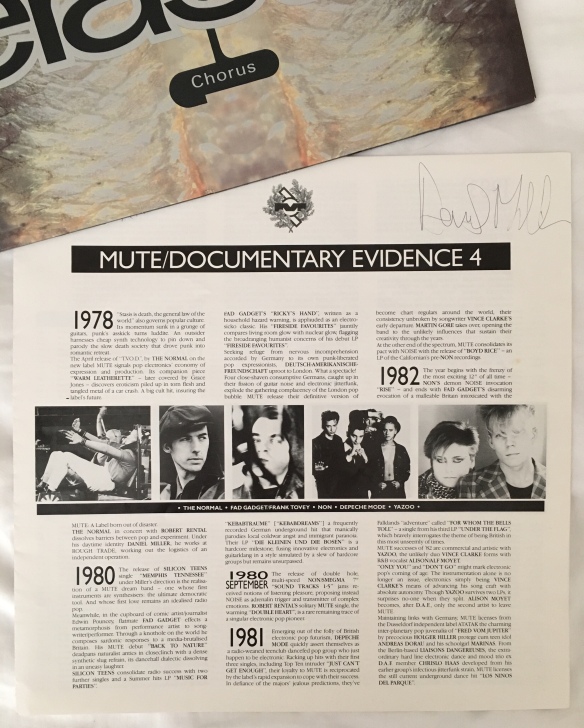 Those familiar with the story of how this blog came about – Erasure fan; found a copy of Mute‘s Documentary Evidence 4 inside my 12″ of said band’s ‘Chorus’; began collecting the Mute back catalogue; decided to write about it – will find an extended version of that story over at The Electricity Club website in an interview they did with me earlier this month.

I found this amusing, and slightly ironic: way back in 2003, when I started this here blog, I got in touch with Chris Bohn, then editor of The Wire and best known as NME journo Biba Kopf, to see if he’d be open to an interview. Kopf, for me, was synonymous with the Documentary Evidence pamphlet, as he’d written the Mute history that accompanied the catalogue listings at the back, and I couldn’t even estimate the number of times I’d read, re-read and digested those words. His response was along the lines of ‘Er… why?’ and so I shelved that as a bad, and slightly foolish idea. When The Electricity Club asked me to answer some questions, I could suddenly see Kopf’s point, and also my own naïveté.

In any event, I accepted, and the interview is now online here. Head over there and you can read about why Mute matters to me so much, musings on how much I love Taylor Swift (unashamedly), what it’s like to work for Vince Clarke, why I believe people have got it wrong about modern day Depeche Mode, and what electronic music I’m currently listening to.

I wrote most of my answers on a flight to Newquay to visit my father, who gets a mention in the interview. I only realised recently how important my dad is in the story of how I came to fall in love with electronic music… but that’s a story you’ll get to read another day.