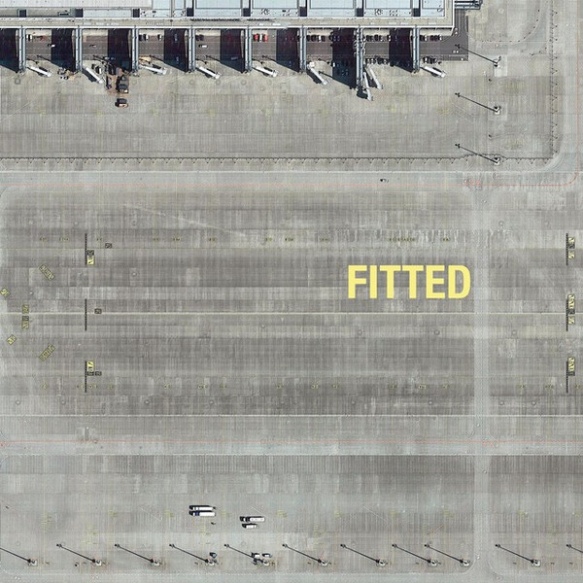 FITTED is a spontaneously-established quartet of Graham Lewis and Matthew Simms from the current Wire line-up, Minutemen’s Mike Watt and Bob Lee from Fearless Leader. The group came together during the LA date at The Echo on Wire’s DRILL 2017 festival tour, rehearsed just once and then took to the stage for a blistering performance loosely based on Dome’s ‘Jasz’, which, after several iterations in the studio, emerges on the group’s debut album as the biographical ‘The Legend Of Lydmar Lucia’.

That track acts as a logical centrepoint to a collection of six tracks that operate on a unique pathway between spacey, acid-fried grooves, the upstart urgency of punk and art-rock. ‘The Legend Of Lydmar Lucia’ finds Lewis intoning a diaristic spoken-word recollection of a particularly vivid art happening at Santa Lucia’s Lydmar Gallery, his delivery carrying the kind of oblique, unfathomable wordplay that is highly familiar from his occasional lead vocals with Wire. The unfamiliar aspect of this track is the swirling, turgid, many-layered bed of sound upon which his vocal rests; murky, impenetrable, thrilling and restless, the sonic stew created by the four musician’s is a breathtakingly complex listen, and a perfect foil for Lewis’s intonation.

Something similar happens on the ultimately incendiary and boisterous opening track, ‘Plug In The Jug’, with lead vocals from Mike Watt. ‘Plug In The Jug’ starts out in tentative, atmospheric territory, sound washing in and out but building, building, building toward something initially unclear but finally coalescing into a groove somewhere between The Doors at their most focussed and Sonic Youth’s Steve Shelley at his Krautrocking, cyclical drumming best.

Elsewhere, ‘The Chunk That Got Chewed’ is a sprawling, beautiful mess of a track with Watt sounding a lot like Pere Ubu’s David Thomas, while closing track ‘The First Fit’ is a mesmerisingly deep piece led by an especially emotional Lewis augmented by wandering, languid jazz rock fluidity buried under treacly reverb.

It’s not clear yet whether FITTED is a one-off project or the start of something that the group will return to whenever schedules allow. What’s immediately clear from the symbiosis of these four talented minds on the six tracks here is that their capacity to produce interesting, engaging, surprising music is probably limitless.

First Fits by FITTED is released November 8 2019 by ORG Music.