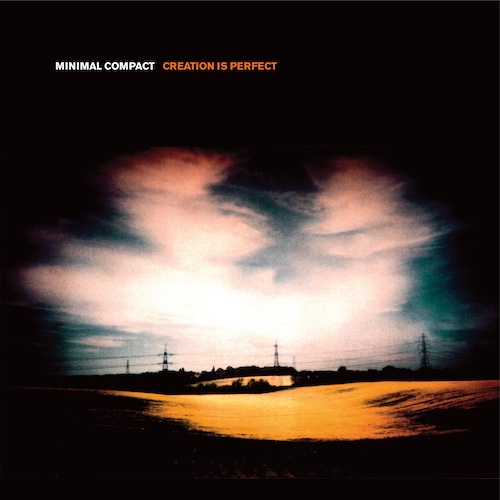 Not exactly a Best Of Minimal Compact album in the truest sense of the word, Creation Is Perfect contains seven tracks from the catalogue of this enduring post-punk quintet, each one updated and re-recorded with shiny new production nous from Wire’s Colin Newman.

Between their formation in in Amsterdam in 1980 and their cessation of activities in 1988, Minimal Compact released five albums and a live document, their approach to what issued forth from punk’s messy entrails being highly individualist, fusing the solid rhythm section of bassist / vocalist Malka Spigel and drummer Max Franken with Middle Eastern melodies and the purring vocal of Samy Birnbach. Augmented by Berry Sakharof and Rami Fortis’s guitars and electronics, Minimal Compact was a stylistic force to be reckoned with, even among an era that produced far more important groups than punk ever could.

Colin Newman is no stranger to Minimal Compact. He produced their 1985 commercially successful album Raging Souls, which yielded two of the songs included here, the emphatic and insistent title track of their third album and the hypnotic and wistful ‘My Will’. He’s also toured as a jobbing member of the group, and his marriage to Malka Spigel has also yielded many collaborations between two like-minded creatives, including the recently-reactived Immersion and the group Githead, which also included Max Franken on drums.

The genesis behind Creation Is Perfect is not dissimilar to the thought process behind Wire’s IBTABA, namely that their recorded output lacked the same sort of visceral impact as their live shows. Less about updating the back catalogue pieces for today’s ear, this album is about capturing that live energy, beginning with the urgent, gleeful and spiky punk-funk of ‘Statik Dancing’ and carrying on through other stellar moments like the chiming guitars and menacing motorik foundations of ‘Nada’. The result is an evenness, a precisely-executed delivery encased within rich, layered studio smoothness but also a certain rawness as the five musicians collide and overlap along paths which are uniquely their own.

The collection concludes with a new track,’Holy Roller’. Beginning with fairground melodies, the track characteristically progresses along a grubby, low-slung bassline offset by layers of whining synths, shimmering melodies and an emphatic, detached vocal. Slow-building and dramatic, the track is the summation of everything that Minimal Compact ever set out to achieve, its skeletal, rattling guitar interplay sounding as beautifully nihilistic as it did at the start of the 1980s. 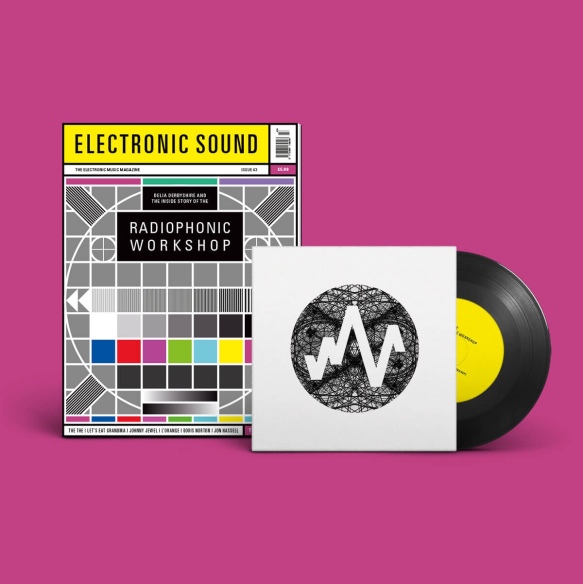 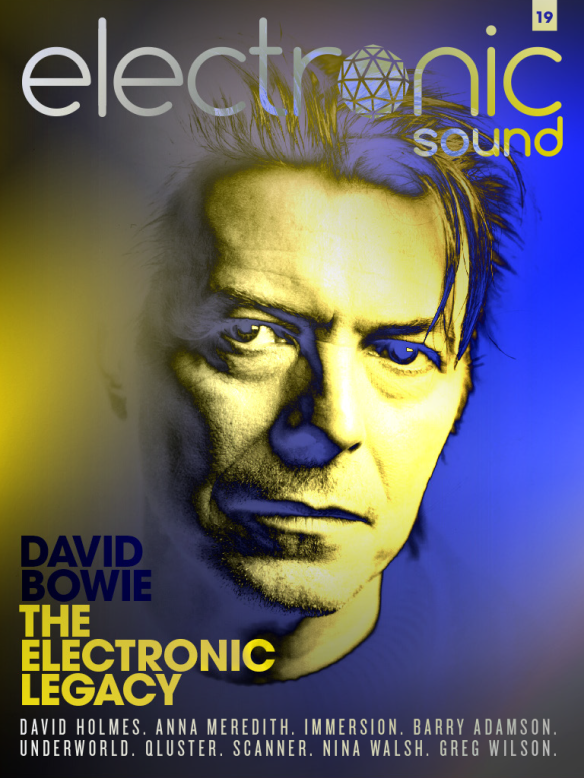 Issue 19 of Electronic Sound is available now, either at electroni sound.co.uk or the iTunes App Store. Appropriately, this issue focuses on the electronic legacy of the sorely-missed David Bowie.

I interviewed Colin Newman and Malka Spigel (aka Immersion) for this issue on the occasion of the duo dusting off their electronic project for the first time since performing at the Royal Festival Hall for Wire‘s spectacularly artsy comeback in 2000. I was there that night, as you can probably tell from my interview. Elsewhere in this issue, I wrote a short piece about a thrilling band called HÆLOS, and reviewed albums by The Choir Of Young Believers, Public Memory and my new favourite band LNZNDRF. 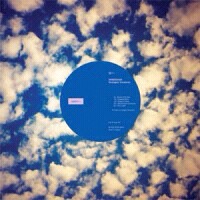 ‘Analogue Creatures’ is the first material by Immersion – Malka Spigel from Minimal Compact and Colin Newman from Wire – since a fabled performance at London’s Royal Festival Hall in 2000 which marked the reformation of Newman’s group. The next decade and a half would see Swim~, the electronica label that Spigel and Newman had established, put on the backburner while the duo variously worked on the resurgence of Wire, live shows by Minimal Compact and the Githead group they formed with Robin ‘Scanner’ Rimbaud and Minimal Compact’s Max Franken.

Named for the organic quality of the synths deployed rather than suggesting that this new 10” EP is a product of the analogue renaissance that gets Big Bang Theory-esque synth nerds all hot under the collar, ‘Analogue Creatures’ is at once deeply ambient, while simultaneously Krautrock in its dimensions. ‘Always The Sea’ and ‘Shapeshifters’ blend together choppy guitar lines with slowly ebbing and flowing synth backdrops, it often being unclear when the synths stop and the guitars start. Despite the absence of any discernible rhythm, there is nevertheless a pulse – of sorts – running throughout the record, evoking the chugging motorik grove that characterised much of Krautrock; Newman sees ‘Analogue Creatures’ as being in the territory of a ‘beatless Neu!’ and it’s easy to see why he’d come to that conclusion.

The EP pivots on the track ‘Organic Cities’. That track saw the duo collaborating with local Brighton synth geek Guy Schneerson, and the track demonstrates a more harmonically full suite of arpeggios, plucked guitar lines and evocative texture. It sits somewhere between the churning linear lines of a Githead melody and a previously-unheard outtake from Vangelis’s Bladerunner soundtrack.

‘Analogue Creatures’ is a slick return to the drifting, expansive electronica that occupied Spigel and Newman in the Nineties, but it’s also yet another evolution of this stop-start-stop collaboration. It doesn’t necessary signal a return to the prominence that the duo gave Immersion in the formative Swim~ days, but despite a long period of absence during which they focussed on the classic guitar-bass-drums formation, the pair are showing that they’re every bit as intrigued by synth music as they ever were.

A full interview I held with Malka Spigel and Colin Newman about the new Immersion record will appear in the next issue of Electronic Sound. Electronic Sound is available at the App Store or electronicsound.co.uk. 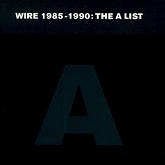 1985 – 1990: The A List was released in 1993, by which time Wire as a four-piece band were no more. Robert Gotobed had left the band by the time The First Letter was released in 1991, the band ditching the last letter of their name and becoming Wir for that album. Wir themselves then promptly called it quits, leaving behind two further tracks which were released on Touch as the Vien single in 1997.

This is a compilation album of tracks recorded by Wire between the Snakedrill EP and the Drill album that included new versions and live takes of the amorphous-lengthed track that proved to be Eighties Wire’s mainstay, its relentless dugga-dugga-dugga rhythm providing the foundation for their material for Mute. So, yes, a compilation, but one with a difference: according to the sleeve notes, ‘The A List was drawn up by asking various compilers to name their “top 21” Wire tracks in order of preference. They were then arranged on a “football league” basis. The final choice and running order are based on this chart and the maximum time of a CD. There have been no edits.’

Those contributing to the vote included the band’s Colin Newman and his wife and Githead accomplice Malka Spigel, Bruce Gilbert‘s chum Russell Haswell, Touch co-founder Jon Wozencroft (who also did the typography for the album), Wire biographer Kevin Eden, England’s Dreaming author and punk authority Jon Savage and Mute’s Roland Brown, and for completeness the entire distribution of votes is included within the sleeve notes. The A List was compiled and edited by Brown, Newman and Paul ‘PK’ Kendall.

The result is a showcase of just how strong Wire’s body of work was in the Eighties. While the purist post-punk fans would no doubt bitterly complain that Wire had more or less left their late Seventies intensity and creativity behind, the Wire that reformed and signed to Mute in the mid-Eighties delivered a high quality pop-inflected ethos mixed in with some of the strangest lyrics that have ever been committed to record. So what if the snarling guitars had been left behind – that was yesterday’s news. The new tracks (mostly) had a smart sound, infused with greater use of technology, while the wry artsiness that dominated Wire’s trio of albums for Harvest / EMI was never more than a sneer away.

The only criticism I have of The A List is that ‘The Boiling Boy’ didn’t make the grade. The version of the track that appeared on IBTABA is probably my favourite track from Eighties Wire, a slow-developing, graceful but strangely linear piece (it scraped into number #56 on the league table with just 29 votes). However, this album was the product of a resolute democracy – how typically Wire to create a compilation this way – and thus I shouldn’t question its exclusion too much. It’s certainly a more considered compilation than the equivalent sweep-up of Seventies Wire, On Returning, which Harvest put out in 1989.

For sharp-eyed completists, note that this was given a stumm catalogue number, rather than the mutel mark used by Mute for some artist compilations.